Most of us have never given airport fueling systems a second thought, yet anyone who has traveled by plane owes them a debt of gratitude.

Not surprisingly, filling an airplane with fuel isn’t as simple as pulling into a gas station and filling up the tank. Fuel systems are complicated and intricate, but they play a vital role in the transport of mail, imported goods, and human beings across the globe. While they’re not exactly Superman, fueling systems might just be the unsung heroes of the skies. 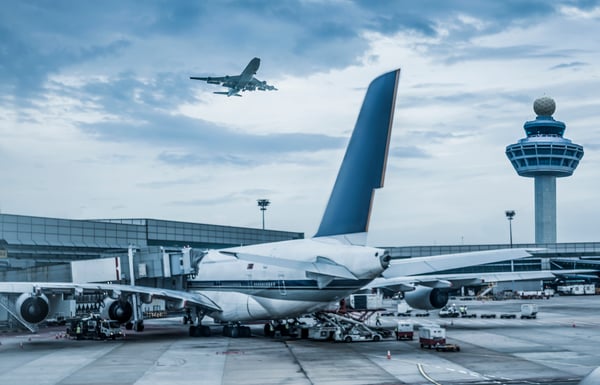 Photo courtesy of iStock/guvendemir
An airplane being readied for flight as another departs a busy airport.

To begin, what is a fueling system?

Much more than a singular machine, fueling systems are made of many moving parts, all managed by experienced employees who work together to safely deliver fuel to aircraft around the world. These parts consist of storage tanks, pumps, piping, fuel servicing vehicles, and all the equipment associated with those pieces.

To simplify things, we can break the process down into three categories: fuel delivery processes, equipment and facilities, and general operations.

These include everything from contracting the company that delivers the fuel, to the transport of the fuel itself, to its final arrival at the aircraft. The essential process is as follows: Fuel arrives at the airport by pipeline, railcar, barge, or truck. It is tested and stored at the airport before being pumped into airplanes by underground hoses, pipes, or refueler trucks.

This refers to the complex infrastructure of equipment needed to receive, transport, store, and pump fuel.

These are responsible for operations like human interaction, environmental regulations, and ensuring personnel has received proper training.

Combined, these three operational branches create the fueling systems utilized at airports around the world.

From airport to airport, fueling systems can operate in a variety of different ways, but it really boils down to the key question of who runs the show.

Airports can run the operations themselves, managing fuel deliveries, owning and maintaining equipment, and hiring their own personnel, or they can outsource the process to a company that specializes in fuel systems.

Let’s consider the best options based on the size of an airport.

General aviation airports—or “GA,” if you’re in the business—are airports used for recreational and private flying. Their tarmacs tend to be lined with tiny, four-passenger planes, owned and operated by aviation enthusiasts with a passion for flight. If you have a friend who dreams of getting a pilot’s license, this is the kind of airport they’d use to make that happen.

Airports of such a small size often choose to operate their fueling systems themselves, either in an effort to be more financially self-sufficient or to bond with the community by hiring locally and investing in the community. Either way, the airport must decide if they want to own or lease all of the equipment required, and where they will purchase the fuel.

Once an airport surpasses the size of a GA, it’s likely they will use a fixed-base operator (FBO), a specialized aviation service operation (SASO), or a fuel consortium to run fuel operations on the premises. An FBO will run the entire operation, while a SASO is defined as an FBO that runs less than full services. In the United States, there are around 3,000 FBOs, with big hitters like McKinney Air Center and Banyan Air Service topping the list of 2018’s Pilot’s Choice Award for best FBO in America.

How does an FBO operate?

In most cases, an FBO or SASO will lease property from the airport to run the operation. They’ll manage the equipment, storage facilities, fueling facilities, vehicles, etc. involved in the fueling process. It’s possible for the FBO to lease their equipment, but they generally prefer to own and operate their own buildings and machinery to maintain control over cost and quality.

FBOs and SASOs are free to purchase fuel from the provider of their choice, often deferring to pilots’ preferences to make that decision. Pilots know which brands they like best—based on the quality of fuel, loyalty programs, or discounts—and the FBO or SASO want to make their pilots happy. (It’s not so different from an ice cream parlor purchasing ingredients from a specific supplier to make their customers happy and satisfied.) The end-user is king.

Another way to manage costs and logistics of fuel delivery is with a fuel consortium. A fuel consortium is formed when many different airlines operating out of the same airport join together to create a separate organization specifically designed to operate the fueling systems. This is especially popular for large hub airports—27 of the 30 largest airports in the U.S. had a fuel consortium in 2009.

Fuel consortiums help reduce overall costs with the added benefit of risk-sharing, but they aren’t involved in the operations in the same way as an FBO or SASO. They are responsible for piecing together efficient fueling systems but do so with the help of third-party companies that handle the purchasing, storing, and provision of fuel.

Do you have questions about your airport fuel delivery system? Visit our aviation market page to find a product solution or email a specialist. We are here to help!