In the drive to improve workplace safety and lower operating costs, North American oil companies partnered with the transportation industry to develop the concept of bottom-loading petroleum tank trucks. Starting in the 1950s, the concept led to industry-wide adoption of a new tanker product: a valve that permitted both loading and unloading through a common valve located at the bottom of the tanker. This valve has a special nose design, which, along with a mating dry break coupler (on the terminal loading arm), allows for the fast, safe connection, and transfer of petroleum from the terminal to the tank truck.

The advent of bottom-loading, combined with other tank truck improvements, made possible entirely new systems for the containment and collection of petroleum vapors. Petroleum vapors were previously exhausted to the atmosphere when loading and unloading tank trucks. This vapor recovery ability became vital as the U.S. Clean Air Act and similar legislation worldwide demanded the lowering of airborne pollutants to protect the environment.

The graphic below illustrates a typical tank truck construction. Petroleum tankers are usually divided into compartments, each of which can carry a different grade of fuel. An emergency valve at the bottom of each compartment controls the entry and exit of petroleum to/from the compartment. Piping connects the emergency valve to the bottom-loading API valve (for loading and unloading).

Manholes at the top of each compartment typically include a hatch for inspections or top-loading, and a compartment vent, which is connected to the vapor plumbing. 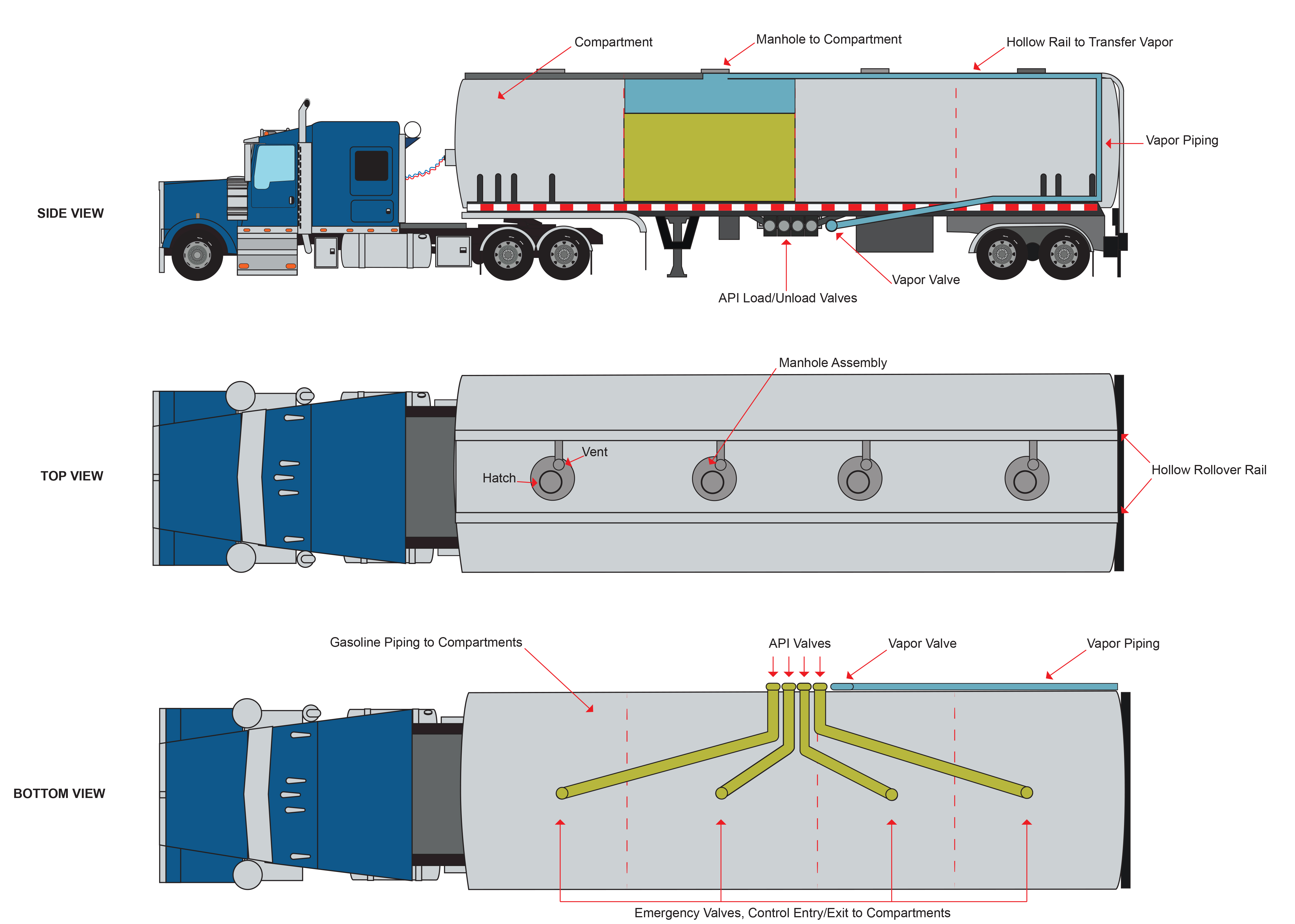 Many parts of the world still employ traditional top-loading technology to fill petroleum tank trucks. These loading terminals typically have an elevated gantry, which allows operators to walk on top of the tank to open the manhole and drop fuel into each compartment.

When unloading at the service station, drivers are often required to climb on top of the tanker and open the compartment manholes to:

The manholes are subsequently closed once the discharge is completed. Manholes with pneumatic vents or use of mechanical vents are often employed to eliminate the need to have operators on top of tankers opening and closing manholes.

As shown below, the top-loading of gasoline generates considerable turbulence as well as venting of fumes to the atmosphere.

The following list of challenges associated with top-loading may be minimized by bottom-loading systems.

1. Static/dynamic sparks
Top-loading is prone to excessive turbulence. Splashing and the turbulent flow of petroleum can cause static electricity build-up (even when tankers are grounded). In addition, operators scrambling or walking on tankers can accidentally scrape or strike the tanker and discharge a spark. Both static or dynamically generated sparks are extremely dangerous, and, when combined with gasoline vapors, can cause catastrophic explosions.

2. Operator safety
Operators have fallen from the top of tankers with grave consequences. Top-loading operators are also exposed to gasoline fumes, which can cause health problems. Today some jurisdictions have prohibited or restricted the operators’ presence on the top of the tank truck during loading and unloading.

3. Product contamination
With compartment manholes open during top-loading, the opportunity exists for rain, snow, and wind-blown dirt to contaminate the product. Aircraft fuels are particularly sensitive to minute forms of contamination. Pens, screwdrivers, and cigarettes are items that have accidentally been dropped into manhole compartments causing contamination, damage, and malfunction of emergency valves and downline equipment.

4. Time loss
Typically, top-loading permits only one compartment to be filled at a time. With bottom-loading, multiple compartments are loaded simultaneously. Faster loading reduces the time the tank truck is waiting at the terminal and greatly improves loading and delivery efficiency.

These illustrations show the typical bottom-loading systems which were commonly applied prior to the introduction of vapor recovery.

The API valve is a spring-loaded poppet valve with a special coupling nose design and a mounting flange. At the terminal, a loading arm with a special mating coupler attaches to and opens the API valve. This "dry break" style terminal coupler is designed to minimize leakage of petroleum when connecting or disconnecting.

API valve and API coupler mate and lock together, allowing the terminal to pump petroleum through the valve
into the tank trucks.

By far the most popular style of API coupler is the load/unload model, which has a handle. The handle opens the API poppet at the service station and allows for gravity unloading of the compartment.

The second style (no handle) is activated only at the terminal by the dry break API coupler during loading (this load-only valve is passive when unloading). Unloading will typically be done through a second valve such as a faucet or butterfly valve, in conjunction with Y-shaped plumbing or a special Y valve. Load-only APIs are also used with manifold systems. 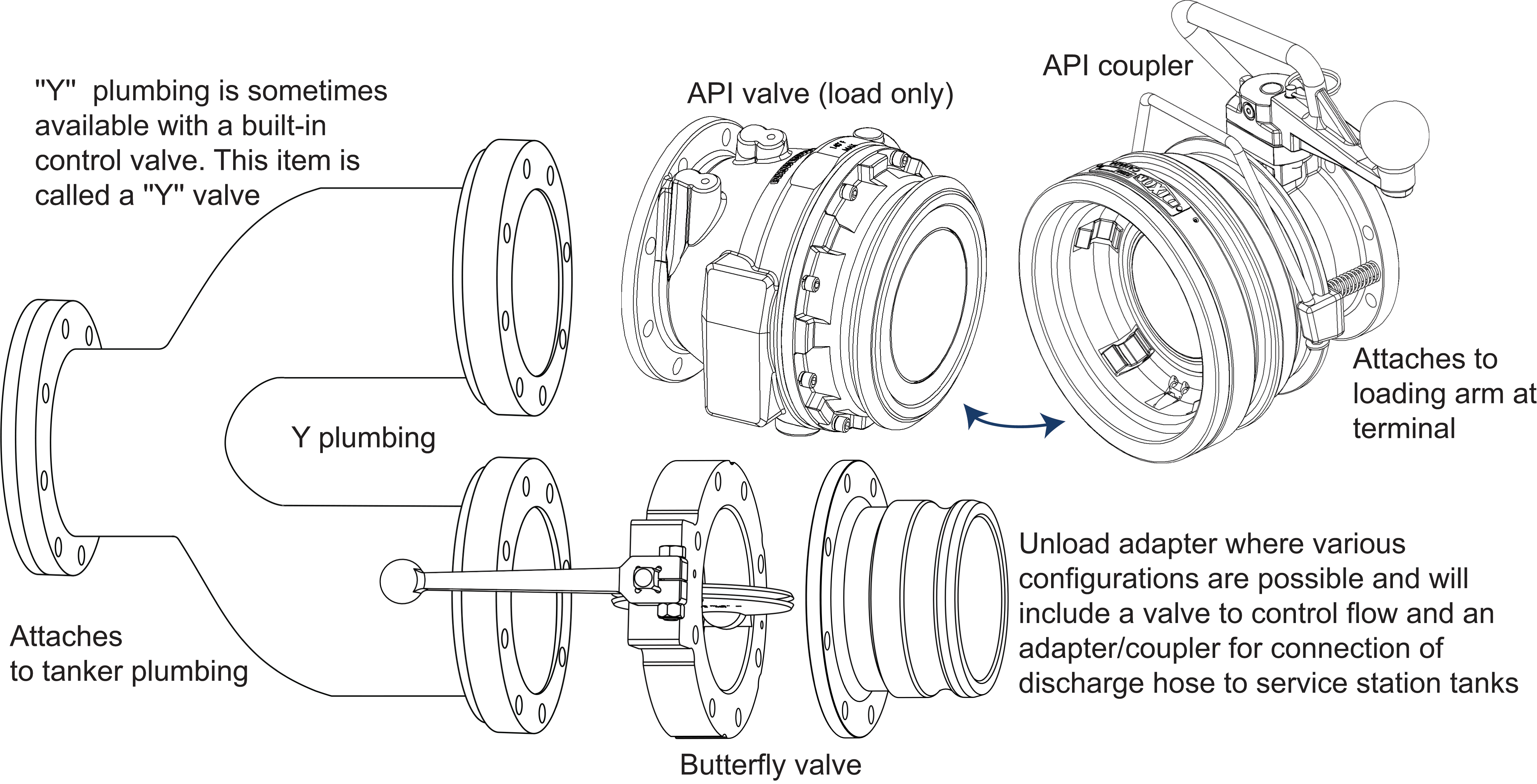 We hope you enjoyed reading this overview of bottom-loading in the petroleum tank truck industry. To learn more, contact a Dixon specialist or visit our Transportation market page.

This blog was excerpted from our Petroleum Tank Truck Industry Bottom-Loading and Vapor Recovery whitepaper.