When it’s critically important to keep a gas or liquid inside a system, consider a bellows seal valve. Bellows seal valves incorporate a cylindrical metal tube that expands and contracts like an accordion to create a hermetically sealed closure in a valve stem. The bellows gets compressed when the valve is in the open position and expands when the valve is closed. Because the bellows expands and contracts as the valve is operated, and because it is welded to the stem and bonnet, there is no leak path for the gas or liquid to escape.

When transferring hazardous materials, bellows seal valves outperform standard or packed valves, which leave a space between the stem and rest of the valve in order to allow the valve to open and close. That space leaves a chance for fugitive emissions (more on that later!) to leak.

Another reason to use a valve with a bellows seal rather than a standard packed valve is when transferring liquids or gas subject to changes in temperature. As Dan Fisher, a business development manager with Dixon explains, “If you have a piping system that runs hot and cold, traditional packed valves tend to loosen up with the temperature changes,” he says. “A bellows seal valve does not because it’s hermetically sealed. That’s why bellows seal valves are the valve of choice in heating and steam services applications.”

Dixon Eagle® bellows seal valves are the industry standard in steam, oil, gas, and chemical plants or wherever keeping a hazardous gas or liquid contained is required.

Traditionally, there are two primary ways to manufacture a bellows seal valve. One method involves welding a series of thin washer-like plates at both their inner and outer circumference to form the accordion bellows shape. A hydraulically formed bellows, on the other hand, is manufactured by pressurizing a single metal tube into wide-spaced metal folds to form the proper shape. 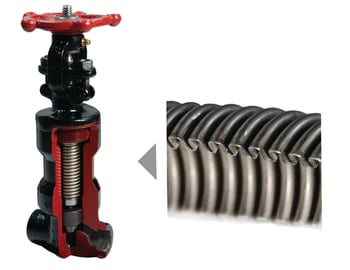 Welded piles 'nest' together to create a shorter height; convenient for small spaces

Hydraulically formed bellows are typically larger, but they incorporate fewer welds, so there is a perception that they are stronger and will last longer. Fisher says that’s not necessarily the case. “If an edge-welded bellows is designed and welded correctly, they can have just as long a life cycle as a hydro-formed valve,” he says. “Form factor is really the major reason to choose one over the other.”

Like standard valves, bellows seal valves employ a gate or globe to form a seal over an opening. A globe valve gets its name from its shape — a cone-shaped plug moves in and out of the flow of fluid or gas. A gate valve operates just like a gate, sliding in between the seats of the valve at a right angle to fluid flow. Why would you choose one over the other?

As a general rule of thumb, bellows valves with a globe closure have a lower flow coefficient than a gate valve—it puts more restrictions on the line, so your liquid or gas will flow at a slower rate for a given pressure. But a globe valve offers a tighter seal than a gate valve. Deciding which type to use depends upon your application.

The primary reason to use a valve with a bellows seal is to contain fugitive emissions — accidental leaks of gas or vapors that escape the system. Fugitive emissions can pose a danger to workers in the area and the greater environment. Since the passage of the U.S. Clean Air Act of 1963, the federal government has issued testing requirements for measuring fugitive emissions on valves. These standards have been updated and strengthened over the years, and if end users do not comply with EPA guidance, they can face both monetary and safety repercussions.

Fugitive emissions also affect revenue as it pertains to product loss. In a large plant, continuously leaking valves can cost millions of dollars. “With a standard packed refinery valve, you can lose on order of $250,000 in product loss per ton of fugitive emissions,” says Fisher. “If you’ve got a 300-million-barrel-per-day refinery, on average, these are going to lose maybe 12 to 15 tons a year. If you do the math, that’s $3 million to $3.75 million that goes into the air in a year. So, a leak-free valve can save that product and put it into your bottom line.”

When it comes to a typical steam plant, valve stem seal leaks are common in steam lines because thermal cycling tends to loosen the valve packing. This can also lead to hazardous conditions for workers as well as lost revenue.

Considering all the valves in a typical plant, the total savings would be significant. Based on eliminating the cost of steam leakage as estimated, a Dixon Eagle bellows seal valve can pay for itself in a period of one to two years.

These bellows seal valves can also save money in other ways as well. Many refiners operate under consent decrees with the EPA, guaranteeing they will not put a certain amount of emissions into the air. Incorporating Dixon Eagle bellows valves will help prevent “chronic leakers,” reducing potential fines and the cost of repairs to the line.

Why Else Should You Choose Dixon Eagle Brand Bellows Valves?

Dixon Eagle is one of the oldest bellows seal brands in the United States, and many seals have been in the field for more than 20 years. All Dixon Eagle valves are manufactured in the U.S., under ISO 9001:2015 Certification. Valves used for chlorine transport by rail cars also meet the standards established by the Association of American Railroads. 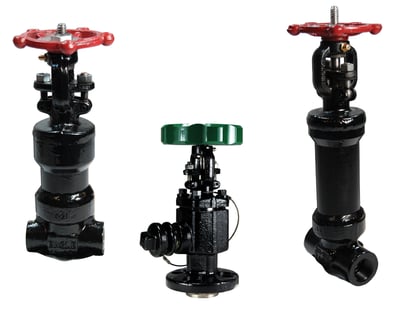 Dixon offers dozens of different bellows seal options off the shelf. If your application requires custom design, we can help with that, too. “Engineering for special high-hazard or critical applications that aren’t necessarily run-of-the-mill, those are the types of projects we specialize in,” says Fisher. “We want to be more of a partner with our customers, making sure that the product is tailored to their applications.”

Plus, with Dixon’s extensive distribution network and fast lead times, you can get your product quickly and save money on shipping.

So, if you’re looking for the best products for your hazardous or toxic materials application, Dixon would love to help. Contact one of our specialists at 713.678.4291 or visit dixonvalve.com