Biopolymers 101: The Future is Now

To some, scientific terms like “polymer” and “biopolymer” may seem intimidating. They have the power to take us back to high school chemistry class or may cause us to tune out. On the other hand, words like “carbs” or “proteins” are easy, every-day ideas. They spark visions of bagels and roast beef sandwiches—tangible, straight-forward, edible words—and we feel confident in our knowledge of these concepts.

Here’s the good news: there’s no need to be intimidated by science jargon—you’re already familiar with biopolymers. Those carbohydrates, proteins, and starches that you know so well are all types of biopolymers, and we interact with them every day.

So what exactly is a biopolymer? The word itself is a combination of two ideas, “bio” and “polymer,” so let’s break down those concepts.

Polymers are essentially life’s building blocks. They are large molecules made up of many smaller molecules, called monomers, forming much of what we see, touch, and interact with every day. Let’s think of them as Legos: say, for example, that an atom is a black Lego, and a molecule is a combination of one black Lego and one red Lego. If that’s the case, then a polymer is many black and red Legos repeating in the same pattern over and over, creating one larger molecular mass. Depending on their pattern, these molecular masses become a variety of things, ranging from man-made plastics to human DNA. 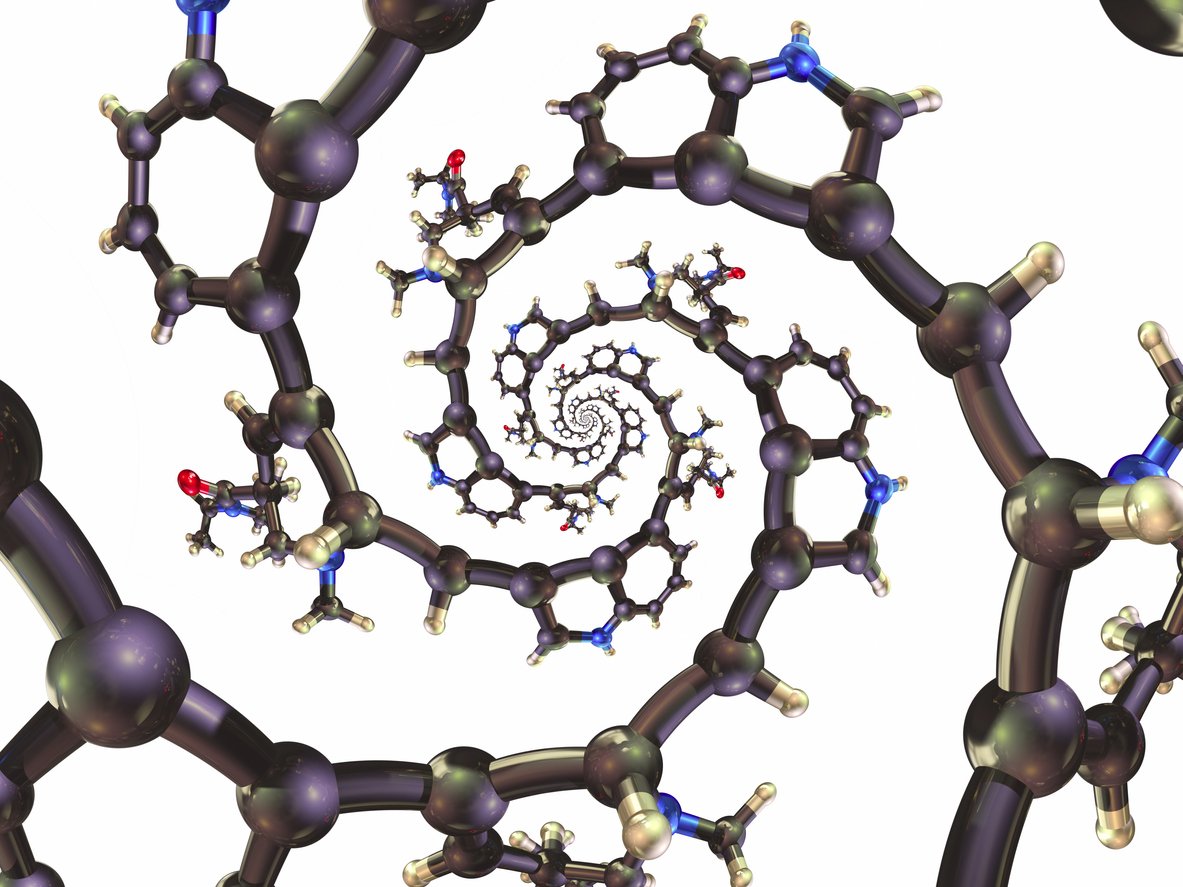 Photo courtesy of iStock/theasis
A ball and stick model of a very large multi-stranded polymer molecule.

Sometimes, plastics are referred to as “polymers,” due to the fact that they are made from primary chemicals coming from oil, gas, or coal.

A biopolymer is a special type of polymer. “Bio” comes from “biology,” referring to living things. By combining the bio and polymer, we get biopolymers: life’s natural building blocks like wood, cotton, or silk, often found in nature and 100 percent biodegradable. There are four main kinds of biopolymers: sugar-based, starch-based, cellulose-based, and synthetic-based biopolymers that have been manufactured but are still biodegradable.

Now that we have this information, what do we do with it?

A lot of plastic production begins by distilling crude oil in a refinery. Crude oil is a complex material and needs to be broken down into its components before they can be used for plastics manufacturing. These components are called fractions. One common fraction is naphtha, which is essential for making plastic. At this point, man-made additives may be incorporated into the compound to affect the kind of plastic that will result from processing- its texture, durability, or fire-resistance, for instance.

Today’s headlines are full of questions about biodegradable or compostable plastics, made from renewable materials rather than non-renewable sources such as petroleum. Vegetable oil, corn starch, wood chips, and waste food scraps are all potential sources for the ingredients needed for plastics production.

Replacing synthetic polymers with biopolymers in many of the everyday items we take for granted could have huge ecological advantages. The very nature of biopolymers means they can always be renewed—they’re composed of living materials, after all—so we’ll never be at risk of running out of them. Polymers, on the other hand, are mostly made from unsustainable sources, like oil and coal, meaning there is a finite amount of items we can create with them. Biopolymers are also biodegradable, emit fewer greenhouse gases in production, and have the potential to reduce our carbon footprint on a global scale.

Photo courtesy of iStock/yoh4nn
A plastic production line in a factory.

If we could harness that potential and exchange biopolymers for synthetic polymers, what would that mean for the future? By 2020, the world will produce as much as 540 million tons of non-biodegradable plastic, most of which will end up sitting in landfills. But, with the help of biopolymers, what if we could replace that synthetic plastic with bioplastic,?

The search for “sustainable plastics” is well underway, with innovators foreseeing a future that contains only plant-based plastics. In fact, this kind of natural plastic isn’t as far off as you might think—for some applications, it’s already here. Fans of PepsiCo’s SunChips might remember their infamous compostable bag that was “too loud” for consumers, forcing the company to create a quieter, more discreet bag. The chip bag is now in its third generation and has gained the approval of all earth-conscious snackers. Sealedair—the company that reduced the use of packing peanuts through its creation of small bags of sealed air used to pad shipping boxes—is also taking strides towards reusable plastics, going so far as to promise 100 percent recyclable or reusable packaging by 2025. The medical community, too, has seen the pros of swapping biopolymers for synthetic ones, and anyone who has had dissolvable stitches has reaped the benefits firsthand.

Even with all these uses, bioplastics represent only one percent of the tons of plastic produced annually. With this kind of technology already in existence, why are we still creating so much synthetic plastic?

The short answer is this: cost. Manufacturing biopolymers is still more expensive than producing synthetic polymers, and the initial investment can be steep. But recent market data shows biopolymers are on the rise. Markets and Markets predicts an increased demand in bioplastics, projecting its production to become a 14.92 billion dollar industry by the year 2023. In Europe, the EU Commission has identified bioplastics as one of the most important potential markets, making Europe the probable leader of the bioplastics market. It’s possible that by 2030 there will be as many as 300,000 jobs in bioplastics in Europe alone.

Biopolymer technology is progressing, and a major challenge is for the materials to be "biodegradable" and/or "compostable" without special treatment. Dixon has been following this initiative, works with chemical companies that are key stakeholders, and will continue to be a responsible supplier of safe products used in the process.

Bioplastics will likely be only one solution to our plastic challenges, but it’s a good start. In a world where so many of us depend on plastic every day, a recyclable, biodegradable, sustainable plastic made from biopolymers could change life as we know it.

Dixon is excited for the future of biopolymers and continues to develop exceptional products and solutions to serve the industry. Do you have additional questions?