Did you know the average Switzerland resident eats more than 47 pounds of cheese every year? The Swiss are some of the top cheese-eaters in the world, but their cheesy love affair falls short of the French, who lead the world in cheese consumption with an astounding 57 pounds per person annually. Where do Americans fall on the scale? We manage a respectable 40 pounds over the course of a year, giving us plenty of room for improvement—and more cheddar. 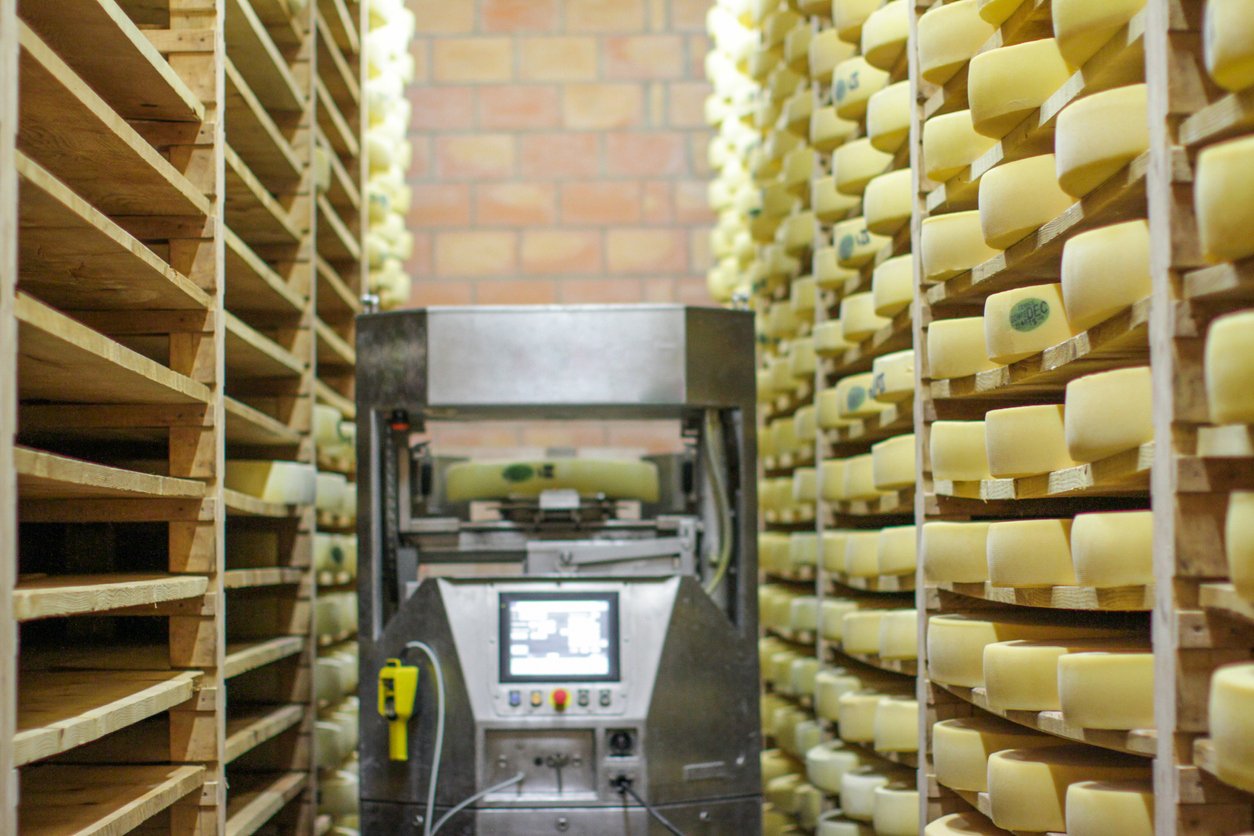 
But how is milk transformed into that cheesy, creamy, gooey goodness that tops our nachos, pizzas, and plates?

Cheese has been produced for centuries, possibly as early as 8000 BC. Milk—from domesticated goats or sheep—was stored in water-tight animal organs, like stomachs, where rennet can be naturally found. The rennet enzyme reacted with the milk, causing it to curdle and form cheese curds. These could be strained, salted, and enjoyed as a rudimentary form of cheese.

Things have come a long way since then, and we no longer rely on animal organs to create cheese. Today, instead of slaughtering young cows for rennet, cheesemakers use rennet made in a test tube—great news for calves everywhere. Automation, too, made it possible for cheesemakers to keep pace with an ever-increasing demand for dairy products.

Here’s how most cheeses are made today:

The majority of cheese is made from cow’s milk, but goats, sheep, buffalo, camels, and yaks also produce milk that can be made into cheese. Different kinds of milk produce cheeses of varying tastes and textures, ranging from crumbly feta to sturdy cheddar.

The taste of milk is influenced by an animal’s diet. Milk from a cow grazing on mountain wildflowers will taste different than milk from a cow that eats in an alfalfa pasture. This is one reason why protected cheeses like Swiss Gruyere and French Comte have to be created from the milk of cows living in specific geographical locations.

Sometimes the milk is pasteurized, which is the process of heating milk to a certain temperature to kill any pathogens that could be harmful if ingested. Most soft cheeses are not pasteurized and need to be aged for at least 60 days to be safely eaten. Even so, most doctors recommend pregnant women steer clear of unpasteurized cheese to reduce health risks to themselves and their babies. The FDA requires mandatory pasteurization for all milk and milk products in final package form intended for direct human consumption.

Once the milk has been chosen, it’s time to add a starter culture.

Starter cultures are made up of microorganisms—bacteria, in this case—that eat the milk sugars (lactose) and transform them into lactic acid. The process is similar to when yeast (bacteria) is added to grapes to create wine.

Rennet, the same enzyme that in the past was harvested from a calf’s stomach, is added to change the milk from a liquid to a solid. It essentially curdles the milk by changing the protein caseinogen to casein, commonly known as a cheese curd.  (If you’ve eaten the Canadian dish poutine, you’ve eaten casein.)

After the curds have formed, they are cut into smaller pieces. The size of the curds directly impacts the final result: soft cheeses—like brie—are cut only a few times, while hard cheeses, like cheddar or Gruyere, are cut several times over.

The separated cheese curds are accompanied by a watery liquid called whey protein, which is drained off at the end of the cutting process.

Salt adds flavor, but also helps to preserve the cheese while it ages. It can be added to the curds directly, or as a kind of brine that surrounds the future cheese.

The curds are pressed into a shape, which is then stored in a cool, dry place until reaching a proper age. The time involved and the aging process itself varies widely depending on the type of cheese being aged (ripened). Mild cheddar, for example, has been aged only a few months, while sharp and extra-sharp cheddar might be aged 5, 9, or even 22 years.

Just like that, with a little milk, salt, and time, you’ve made cheese.

Where Art and Automation Meet

While cheesemaking is still very much an art, modern innovation has also made it a bit of a science.

Photo courtesy of iStock/Jaroslav Noska
Cheese production in the countryside.

Cheese masters are aided by equipment that can automatically cut curds and drain the whey, requiring only a few overseers to create a large quantity of cheese. Some wheels of cheese, like Gruyere and Parmigiano Reggiano, need to be turned periodically as they age, which used to be a tedious and backbreaking task. Now, a cheese-turning robot moves through aisles of cheese, quietly flipping each wheel, one by one. 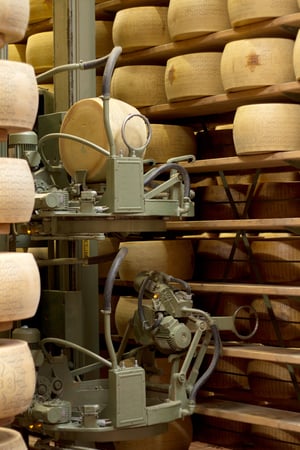 Photo courtesy of iStock/ClaudioVentrella
Robot in a maturing storehouse.

Producing enough cheese to be exported and enjoyed around the world isn’t an easy task, but combining tradition with modern automation makes it possible. And truly, there’s something a little magical about that.

Dixon is delighted to play a role in this process. Our sanitary line helps America’s cheesemakers create more cheddar and Colby-Jack than ever. Around the world, cheesemakers rely on our 3A-certified pumps, valves, and fittings to safely and reliably help meet the growing demand for cheese. It’s an honor to be included in this thousand-year-old tradition.

One more fun fact about those cheese-obsessed Swiss? Women in Switzerland live longer than anywhere else in the world, boasting an average life expectancy of 79.03 years—three years longer than in the U.S. Fresh alpine air might have something to do with their good health, but we give credit to the cheese. Pass the Gruyere!