Once upon a time, American families would wake up in the morning to fresh milk waiting on their front stoop. Dedicated milkmen delivered that delicious liquid to growing boys and girls everywhere, making it no longer necessary to keep a cow in the backyard. Today, milk delivery has all but disappeared, with a meager 0.4 percent of consumers still paying for this service. But never fear: the milkmen of yesteryear are still hard at work hauling milk, just in a different capacity.

Photo courtesy of iStock/ronstik
Fresh milk bottle and old can on the table in cowshed.

In the early 1900s, the dairy industry was made up of small farms. Herds were limited in size because one farmer could only handle about 20 cows. In a time before refrigeration, any milk that wasn’t immediately consumed needed to be transformed into cheese or butter. The milkmen of that era relied on a horse and buggy to transport their wares, using large drums—or “milk cans”—as containers. Customers would typically come to the milk truck with their own buckets or jars to hold the milk. 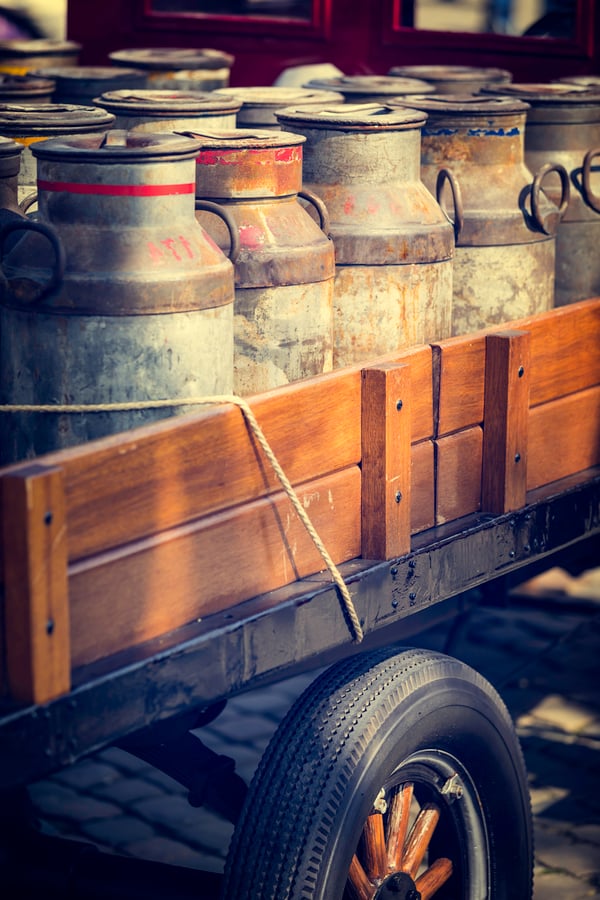 The milk can era was problematic for a few reasons, the biggest of which was the health risks that came with it. The drums were only lightly rinsed between uses and remaining dirt would settle to the bottom of the can, making end-of-day milk a lower quality than that which was purchased first.

Heat was another problem for milk cans. Uninsulated, the cans were susceptible to heat and sun, causing the milk to sour before it was sold. Even so, five-gallon aluminum milk cans were used into the 1970s—although they were eventually transported by automobile instead of horse and buggy.

Advancements in technology changed modern-day farming, which brought change to the dairy industry as well. The invention of the tractor allowed farmers to double the amount of hay they could grow, which meant they could feed twice as many cattle. Bigger herds meant more milk, which needed to be transported more efficiently and over longer distances.

The bulk tanker made its debut in the 1930s, just before World War II, eventually spreading across the country and replacing milk cans entirely. Transporting the milk via one large tank was quicker and easier for transporters, otherwise known as “milk handlers,” saving them time and money. These milk handlers spurred the switch from cans to bulk tankers.

To stay relevant, milk producers had to adapt to the new methods of transport or get left behind. Instead of storing milk in the traditional cans, farmers had to purchase and install an expensive open vat, which could then be pumped into the tanker.

The cost of the equipment forced a lot of small farms out of the dairy business, marking the beginning of the end for the small dairy farmer. It was cheaper for the haulers to service large, nearby farms, easily accessible by a good road. Even if a farmer had invested in the proper equipment, they weren’t guaranteed cheap transport if they were in an out-of-the-way part of the community.

Photo courtesy of iStock/deimagine
Farmers working on a dairy farm.

Today’s dairy farms are equipped with milking machines, capable of milking large herds of cattle at a time. Without ever touching human hands, the milk is taken from the udders and pumped into refrigerated storage tanks. From there, it is moved into a tanker truck.

Modern-day milk haulers no longer rely on a horse-and-buggy; they transport their wares in one of three different kinds of vehicles: double-axle trucks, triple-axle trucks, and tractors. These powerhouse vehicles are capable of moving a huge amount of product, with some tanks holding up to 7,200 gallons of milk.

Once the milk is in the insulated tanker, it is taken to a facility for processing. If there’s room in the tank, the truck might stop at other dairy farms and add their milk to the tank before heading to processing—it all depends on the size of the farms (and the tank).

Gone are the days of simple pick-up and drop-off: in order to transport milk most efficiently, milk haulers use computer programs to find the best routes between stops. The routes, and the farmers on them, are extremely important to both the haulers and the farmers, since both their livelihoods depend on the success of the route. Milk producers are especially loyal to their haulers.

The tanker driver is also responsible for inspecting the milk, ensuring that it has been stored properly and at the correct temperature. Drivers take a sample of the milk from each farm pickup, which will be tested for protein and butterfat levels, as well as antibiotics or bacteria. If even a trace of antibiotics is found, the milk cannot be sold to the public.

Today’s milk haulers no longer have to break their backs moving heavy milk cans, but they still face (unnecessary) risks. Every year, haulers lose or smash their fingers because of outdated valve equipment. At Dixon, we think injuries are one thing milk haulers shouldn’t have to worry about. Our hygienic tanker valve has a unique lock-arm design, completely eliminating the pinch-point. It’s simply the next step in the ever-evolving story of America’s milkmen.

Interested in learning about the DX60 hygienic tanker valve or other products in our food and beverage line?