Hose couplings are designed to keep connections secure. Under many circumstances, you wouldn’t want a hose to suddenly detach from its connection. But sometimes you do. And that’s where a breakaway coupling comes in. Breakaway couplings are used to minimize damage associated with pull-away accidents. They protect terminal and loading/unloading equipment and eliminate unwanted product release.

“They are essentially an engineered fail point,” says Sean Andersen, a product manager at Dixon. “They are designed to separate when either a force load is applied to it or when a hose reaches its end of travel. Its function is primarily to protect the hose and the piping from more permanent damage.”

Breakaway couplings are used in a variety of industrial, marine, and even consumer-oriented applications. What would happen at a gas station if a driver unexpectedly pulled away from the pump without disconnecting the fill nozzle? A breakaway coupling ensures that damage to the gas pump remains minimal. At the same time, a poppet valve within the coupling, automatically seals off the system, preventing a spill and potential fire from the spilled gasoline.

Where else do you typically find breakaway couplings?

Three of the most common types of breakaway couplings include industrial, marine, and cryogenic. 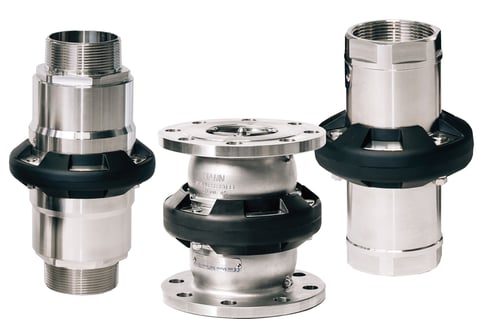 Industrial breakaway couplings are by far the most common and can be used in myriad different applications. They are designed to release at any angle from 0 to 90 degrees and are always installed to a fixed point. Marine breakaways, on the other hand, only release at a straight pull--not at an angular pull--and are installed between two runs of hose.

You’ll usually find marine breakaways employed on offshore oil platforms, in line between the platform and hose to the supply vessel, pumping fuel, drilling mud, or chemicals for the operation. The marine breakaway is designed not to respond to the normal rocking of the boat on the waves, but if the boat were to start drifting away from the platform in a horizontal direction, stressing the hose, the breakaway would activate, protecting the assembly while the stopping the flow of liquid.

Cryogenic breakaways are based on industrial breakaway designs but are specifically made to handle ultra-cold cryogenic fluids, such as liquid nitrogen, oxygen, and liquid natural gas (LNG). The breakaways are constructed from 316L stainless steel and fitted with specialized PTFE (Teflon™) seals, which can handle the extreme cold as well as drastic changes in temperature. “If you’re at a site in Florida, for instance, and you’re dealing with an ambient temperature of nearly 100-degrees Fahrenheit and then within minutes you start pumping a liquid at a temperature of -260 degrees Fahrenheit, the breakaway needs to be able to survive that extreme change,” says Andersen. “Materials shrink at different rates. There’s a bit of elfin magic that allows us to accomplish that.” Or simply years of experience in the field.

Dixon is the exclusive North American distributor of MannTek safety breakaway couplings. MannTek products are commonplace at LNG facilities all over the world. Our couplings have been part of over 35,000 successful LNG transfer operations going back as far as 2013. Dixon, in partnership with MannTek, has also been developing breakaways for leading-edge applications, such as rocket fueling, liquid ammonia and liquid oxygen transfer, and other hazardous materials such as chlorine.

The Anatomy of a Breakaway Coupling

A breakaway coupling consists of two halves, each with a valve, a seal, and three external breaking bolts. In the case of axial tension on the line, the bolts take up the force and break before damaging the hose and its fittings, as the coupling disconnects. At the same time, spring valves in both coupling halves close, ensuring minimal leakage of the fluid from the line. After the situation which caused the disconnect has been fixed, the coupling can be reconnected using a new set of bolts. Always remember to inspect the coupling first!

Sometimes you don’t want any strain exerted on a hose. That’s where a cable release might be utilized instead of a breaking pin.

Cable release breakaway couplings are traditionally used to prevent damage and minimize spillage associated with drive-away and pull-away incidents. In some applications, the necessary force of the breaking bolts may be too high to prevent damage to loading arms or other pipes and equipment. Or, if you’re transferring particularly hazardous fluids, such as chlorine, you wouldn’t want any strain whatsoever applied to the hose. Under these conditions, the use of cable release safety breakaways may be more appropriate.

In a breakaway triggered by a cable release, a run of cable--shorter than the hose--is attached to the coupling at one end and to a rigid fixed point at the other. The coupling has a clamp device that connects coupling halves. The device is released when the strain of the cable achieves a predetermined limit and the coupling disconnects. If a tanker truck, for instance, pulls away before disconnecting its hose, the tensile force travels along the cable, leaving the hose or loading arm tension-free at all times. Simultaneously, spring valves in both coupling halves close so the transferred medium is not discharged.

PERC or Power Emergency Release Couplings are a specialized type of breakaway used in LNG applications. In an emergency, nitrogen gas fills a cavity in the coupling, safely overpowering the bolts. The PERC system offers a variety of flexibility when it comes to activation, including three different triggers: release by Emergency Separation Device (ESD) signal, manual override (independent of an electrical signal), or in case of a complete system or power failure, it can act as standard industrial breakaway discussed above.

Normally, you wouldn’t want to put the coupling at the end of a hose where it’s going to be handled excessively or dropped. In that case, you’d be putting unnecessary force on the bolts, which could cause them to wear prematurely. Breaking bolts and seals should be inspected and/or replaced annually, particularly if your application adds excessive strain.

Most importantly, you should select the right style of breakaway for the job. Dixon can help with determining specific break loads for any application. We can also work with end-users to custom design breakaways for just about any specialized job.

Dixon brings a lot of value when considering applications, says Andersen. “In a lot of large engineering projects, like bunkering or liquid transfer, there are many engineers involved in the entire process, from docks to pumps to transfer lines,” he says. “We can’t necessarily help you pick the right mooring lines, but we are very focused on the manifold and hose and what’s going on at that connection. In my case, I’m totally zeroed in on that part, and I’m bringing 30 years of knowledge to it.”

What to learn more? Interested in a quote? We would love to help. Call 877.963.4966 or contact our sales team at sales@dixonvalve.com