In the Field: Fluid and the Mining Industry

Here’s a number that might surprise you: it takes roughly 260 gallons of water to produce one ton of coal. That same amount of water is enough to run a dishwasher 86 times, flush a toilet 175 times, or meet one person’s recommended daily fluid intake for almost an entire year.

So, what’s all that water being used for in the mines? Almost every step of the process—from managing dust to transporting coal—relies on water in some form or another.

Photo courtesy of iStock/SergeyZavalnyukHydromonitor at a mining site.

The mining industry is broken down into four main types: surface, underground, in-situ, and placer.

Surface mines are fairly self-explanatory: heavy machinery is used to access materials from the earth’s surface like rock, sand, or coal. Quarries, for example, are a type of surface mine. Altogether, they provide more than two-thirds of global mineral products every year.

Underground mines are used to access pockets of ore located deep beneath the surface of the earth. Miners use several methods (room-and- pillar) to create these mines depending on factors like the type of ore being mined and its configuration underground. Both surface and underground mines depend on water in their day-to-day operations.

Like underground mines, in-situ mines seek out materials that are too far underground to access through a surface mine. Unlike underground mines, they operate by dissolving the element—typically uranium or copper—in a solvent before pumping it up to the surface where it can be processed and made useful. In-situ mining doesn’t exist without water: it relies entirely on the aquifers in the earth. An injection well is inserted into the aquifer along with a leaching solution. Once the solution circulates through the aquifer, the ore rich solution is then pumped up to the surface through extraction wells.

Placer mines filter valuable materials out of the water, like prospectors did during the Colorado gold rush. Clearly, placer mines require water, too.

Water Use by Category

In addition to mine types, mines can be categorized by what they produce, such as hard rock, sand and gravel, industrial mineral, and coal mines.

Whether underground or on the surface, hard rock mining typically requires drilling, blasting, transporting, and stockpiling. As with any mine, fresh water is needed for routine operations and the mining community itself. From consumption to sanitation, water is a crucial part of keeping the mine up and running. But other water—fresh or not—is necessary for drilling, dust control, and processing minerals.  When certain minerals are being removed from the mine and into the processing stage, they are covered in water to control the amount of dust produced.

Roughly 90 percent of sand and gravel comes from loose material, which is collected and passed through crushers, screens, and mills, creating products of various sizes. Gravel, sand, clay, and silt are made through this process.

Almost every machine—crusher, wet screener, sand screw, and certain classifiers—needs water to work properly. In most of them the water is used to wash the ore or act as an agitator with powered ores. The wet screening alone requires 60 to 180 gallons of water per ton of material.

The technique for mining industrial minerals, or soft rock, varies widely by the material. Kaolin (clay) and silica sand (used to make glass) are two examples of these soft minerals, and we’ll use kaolin as an example. 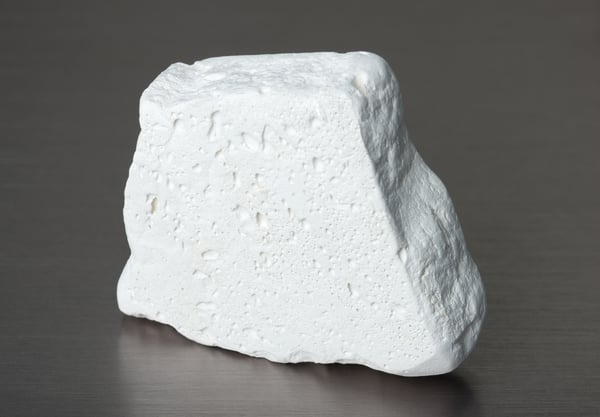 Kaolin is used to make ceramics, paper, and paint, among other things. It can be found in depths of as little as 10 feet, down to 200 feet underground. Layers of soil are removed to expose the kaolin. That soil is referred to as “overburden” and will typically be used to restore the site during the reclamation phase. During the exploration and development phase, mines (inline link blog 1) like these may use up to 1,000 gallons of water to extract a sample core of earth to be used for surveys.

For kaolin, the real water demand comes in later, during processing. The material is usually transported as slurry, meaning the clay is still suspended in water. The kaolin is run through a slurry pipeline which has been specially engineered to move ores like clay, iron, and mining waste to the processing plant. Once there, the slurry is thinned out using water, screened, filtered, dried, and packaged.

How much water does it take to accomplish all this? Approximately 2,000 gallons are needed to produce one finished ton of product. On top of that, an estimated 80 percent of the total finished kaolin is shipped to the paper industry as slurry, requiring even more water for transport.

Coal is mined in several parts of the U.S., in both underground and surface mines. Underground coal mining is typically done in the east, where water is vital to keep the cutting surfaces of mining machinery cool—without it, there’s a risk of fire or explosion. 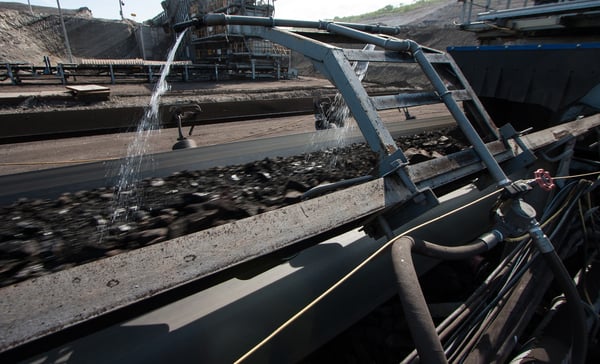 In the west, where most coal mining is done via surface mines, water isn’t needed for the mining itself. Instead, it’s used in hose, valve or fan based fogging systems that manage the coal dust. Miners also use a solution of calcium chloride and magnesium chloride when fighting the dust, since these salts can naturally take moisture from the air.

What Happens to Used Mine Water? 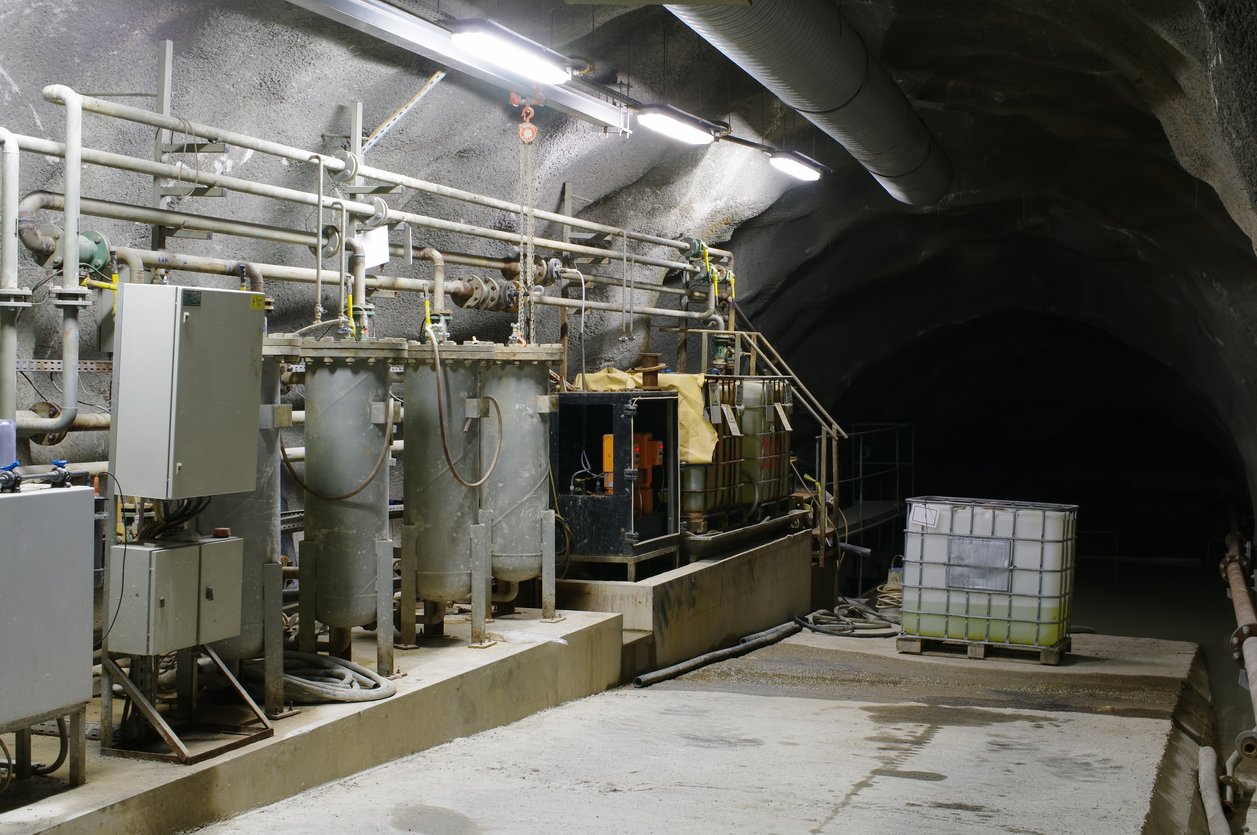 Photo courtesy of iStock/aeduardUnderground water treatment station of a mine.

Most mines reuse water as much as possible. In 2009, a diamond mine in Australia reduced its water use by 95 percent in only four years, simply by recycling and processing its water. They collected and recycled water from their processing plant and tailings pond to be used throughout the mining process. In 2016 the diamond mine piped out unwanted water from the underground mine and surface pit to their processing plant making it accessible for their needs.

Photo courtesy of iStock/mabus13Three discharge pipes spewing water into the main sump of an underground diamond mine.

If the water needs to be discharged it must be treated first. Because it holds salts and other contaminants, it can’t be safely discharged in its current state. Treatment technology varies, with some mines purifying the water to agricultural standards. In some instances water treatment facilities are built on site where a series of tanks, valves, pipelines and filtration systems make the water suitable to be released.  It is even possible to create potable water from used mine water, like AngloAmerican is doing for a community in South Africa.

Other Liquids in Mining

Water is fundamental to mining. Pure water, saltwater, slurries, and additives dissolved in a water solution are all important to the mining process. But water is not the only important fluid that keeps mining operations moving. On most mining sites you’ll find excavators, bulldozers, and heavy duty trucks that require oils and hydraulic fluids to perform their function. Without them, the mining industry would grind to a halt and our world along with it.

That’s why Dixon offers a wide array of products to help throughout the mining process. From pumps to valves to loading arms, we equip miners with the reliable tools they need. We recognize the complexity of the mining industries and the hard work that is required to produce minerals and ores we use everyday. At Dixon we strive to offer mining products designed with a focus on safety and efficiency.  Visit our mining market page to see a complete list of products.

If you need help with a specific mining application, contact us through our website. We’d be delighted to work with you.