Hydrogen as a Fuel

If you’ve ever been stuck in traffic on the Capital Beltway around Washington D.C., you know how many cars, trucks, and motorcycles depend on fuel for their daily commute — about 267,000 per day to be exact for that region. So, when fuel shortages occur, like in the 1970s, energy policy and alternate fuel sources become hotly debated issues. Today, industry experts are naming hydrogen as the fuel of the future. When hydrogen burns in the air, it produces nothing but water vapor, making it one of the cleanest fuel options. Hydrogen can be produced from a wide variety of resources including natural gas, nuclear power, biomass, and renewable power sources like solar and wind, making it an attractive fuel option. Hydrogen can fuel vehicles, heat homes, and be used for portable and stationary fuel cell applications. 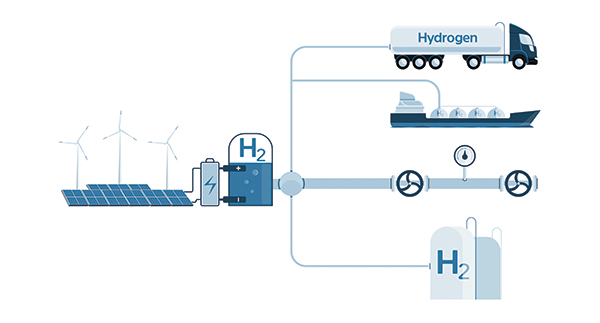 Companies across many industries use hydrogen as a fuel source. In fact, Dixon recently partnered with a leading aerospace company that is working to power the next generation of rockets. Several Dixon couplings will be used to supply the hydrogen to their rockets, one for oxygen, and one for liquid natural gas. They will hopefully blast off by the end of 2022!

Hydrogen fuel is produced through several different methods, the most common being natural gas reforming, which is a thermal process. Other common methods include electrolytic, solar-driven, and biological processes.

Keep reading to learn more about these processes and to gain insight into this innovative fuel source. 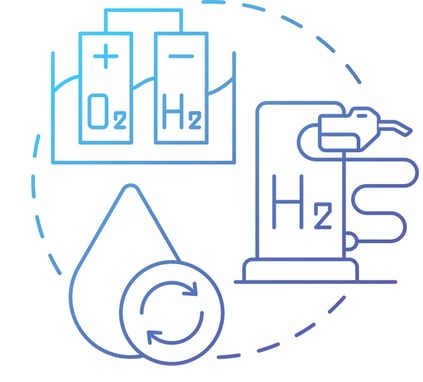 Electrolytic processes take place in an electrolyzer, a system that uses electricity to break water into hydrogen and oxygen in a process called electrolysis. Through electrolysis, the electrolyzer system creates hydrogen gas.

Sean Andersen, Product Manager at Dixon, shares his insights on how different industries are using hydrogen as a fuel. "The largest amount of hydrogen is actually used in the refining process where they're processing crude oil," says Andersen. "They're taking these really long chains of hydrocarbons that they get from crude oil, and they're kind of breaking them down."

Sometimes during this breaking process, refineries get too many small pieces of the hydrocarbon, so they go back in and they add hydrogen and carbon to make the chain longer. "When more hydrogen is added, you're able to increase the amount of, let's say, jet fuel," Andersen explains, "These refineries want to make as much jet fuel as possible, so they put hydrogen into their mix in order to maximize the amount of jet fuel that they get out of it."

Another place where we see hydrogen commonly used is in emerging aerospace companies. They typically use hydrogen in their second stage rocket, which is usually a hydrogen and oxygen engine because it's energy-dense, meaning that the amount of energy as compared to the weight is higher than other fuels that can be used to propel the rocket.

"There are tests going on right now where you can actually inject hydrogen into natural gas pipelines, and a certain amount of hydrogen can be burned along with natural gas," says Andersen. "The only thing it produces is water when it's burned or when it's converted to energy in a fuel cell." In that case, there's no carbon footprint, which means the process reduces CO2 emissions to the atmosphere.

The Future of Hydrogen as Fuel 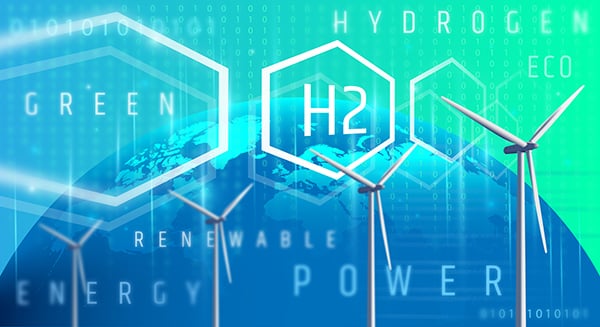 Since the 1970s energy crisis, scientists have been searching for a more reliable fuel source. Hydrogen has become the holy grail.

"I think we'll start to see hydrogen becoming more popular in the future," says Andersen. "I'm going to predict it will make up 10 to 20 percent of fuel consumption in the next five to 10 years."

There are two things for energy that are quintessential, "when we have fusion and inexpensive hydrogen in plentiful supply the problem will be solved forever." One is inexpensive hydrogen, which experts are looking to do with electrolyzers and surplus green energy like sun, wind, electric dams, and nuclear power plants. The other one is nuclear fusion. It uses hydrogen that fuses hydrogens together to create helium, and it’s the same process that the sun uses to make sunlight and energy.

Those two elements have been pursued since the seventies' energy crisis to address the problems that they've been trying to solve. "As we make more hydrogen and scale-up production the costs will come down," Andersen says, "We're seeing lots of different ways that this hydrogen can be used."

Hydrogen has a lot of applications if we can solve the complexities of cost-efficiently making it. It's similar to batteries. Years ago, you would never have thought about having an electric car because the batteries were bigger than the car. Today, we have the technology where batteries fit in cars and there are more than two million electric vehicles on the road nationwide.

"Hydrogen is likely to be the same thing. Its costs are coming down, just like renewable energy and solar prices started coming down a few years ago," says Andersen. "They used to be five or 10 times more expensive than fossil fuels, so it wasn't practical to use, but now as we produce more of it, we're getting better at it and so it’s a lot more affordable now."

We expect hydrogen to follow the same path. It will get cheaper as we go along and get better at figuring out how the pieces fit together.

If you're interested in learning more about how Dixon is working with hydrogen as a fuel source, contact one of our Dixon specialists.