Over the past decade, several companies have established themselves as international experts in the design and functionality of the various components that make up LNG transport systems:

The superior quality and functionality of these components are based on years of experimentation and evaluation of tem­perature differentials and how they affect the expansion and contraction of different materials used in the components. These factors include Teflon® seals, the engineered stainless steel mating components and how they are energized. It’s a complex combina­tion of engineering and scientific factors that includes careful evaluation of surface finishes as well as the geometry of how and where the seals make proper contact with the mating components in extreme-cold temperatures.

Adding assurance to the integrity of the product designs, tens of thousands of suc­cessful transfers involving millions of gallons of LNG material have been recorded.

The coupling procedure is simple: align the rollers on the coupler with the notches on the adapter, push the coupler onto the adapter and then rotate past 100 degrees. This procedure locks the coupling together, creates a self-seal, and opens the internal valves for full flow with low pressure drop. The dual poppet design shutoff mechanism seals liquids and gases safely behind the valve, thereby eliminating fugitive emissions as well as the danger of a spill of LNG fluid.

While the operation of dry disconnect couplings is quite intuitive, it is important that proper personal protective equipment (PPE) be worn during the bunkering pro­cess, conforming to standards set by ISO/ DTS 18683:2015 standards established by bodies such as the International Code of Safety for Gas-Fueled Ships (IGF), plus organizations such as the Pipeline and Hazardous Materials Safety Administration (PHMSA), the Society for Gas as a Marine Fuel (SGMF), and the U.S. Coast Guard.

Cryogenic breakaway couplings use a closure mechanism similar to the dry cryogenic coupling, with an optimized poppet designed to close off and stop the liquid flow while containing the LNG in the hose and pipe.

Cable release cryogenic breakaway couplings are designed to minimize fuel spills or damage associated with inadver­tent drive-away or pull-away incidents. They are activated by a cable that limits the stress that can be applied to the hose or to the loading equipment. A cable release guards against damage happening to loading arms or other piping and equip­ment, which might otherwise happen due to the force of the breaking bolts. 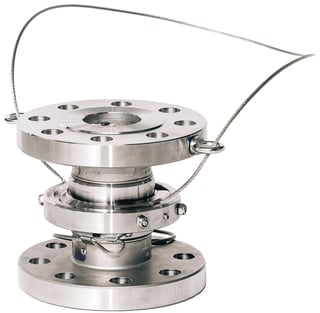 Powered emergency release coupling (PERCs)  incorporate the ability to actively and remotely release the coupling "on-demand" without causing any strain on the transfer system.

The PERC will also activate and respond to stress on the loading system, thereby giving it both “active” and “passive” security and safety characteristics.

The PERC option is substantially more complex than other breakaway coupling options because of the power pack, acti­vation equipment and other components that are necessary to accomplish PERC’s “on-demand” breakaway functionality. But for some operators, the added ex­pense is worthwhile based on how their bunkering operations are set up, as well as the need for safety.

With all breakaway couplings, repair kits are available that enable the bunkering operation to be brought back online quickly – usually within an hour’s time. Commonly referred to as a “breaking bolt” and “seal kits,” they include new breaking bolts that are installed following draining of the line, replacing the seals, and then pushing the two hose assembly halves back together.