For the average Joe, the word “mining” might spark an image of old-timey workers, covered in soot and dirt, picks slung over their shoulders and helmets on their heads. Others might recall the legendary gold-rush stories of our school days, picturing the determined men and women who sought a bonanza in the streams of California.

Neither idea is particularly accurate when it comes to today’s miners.

Early civilizations created mines by digging a shaft, either by hand or with primitive tools, and hauling the materials out. It was a slow and tedious process. Explosive black powder arrived on the scene in the Middle Ages, A.D. 476 to approximately A.D. 1450, shaking things up and speeding the mining process dramatically. Dynamite—invented in the 1800s—ushered the industry into an era where the ground could be opened with a literal boom.

Each advancement in technology made mining a little bit easier. Candles were replaced by whale oil lamps, which were replaced by lightbulbs, making it easier for miners to see their workspace. Pneumatic drills replaced hand tools, providing greater accuracy and power. Today’s mining is accomplished with heavy machinery, explosives and drills, trucks and bulldozers, and miners who are valued for their brains over their brawn.

Boiling it down to basics, mining is the process of extracting minerals or other valuable materials from the earth. Chalk, flint, and ochre were some of the first items to be mined by early civilizations, with the oldest underground mine dating back more than 40,000 years in the distant mountains of Swaziland in Africa.

Silver, gold, marble, salt, diamonds and other precious gems, metal, oil, coal, and natural gases are all examples of materials obtained through mining. From the fuel that powers our vehicles to the countertops in our kitchens, the products from mining remain an enormous part of daily life.

Take iron, for example. By adding up the number of nails, saws, pipes, grills, stoves, rails, cars, electronics, tools, and more used in modern life, the Minerals Education Coalition estimates that every American will rely on 27,416 pounds of iron throughout their lifetime, making iron ore one of the most integral parts of the world’s economy.

Our iron use only scratches the surface of a much deeper dependency on the mining industry. It’s estimated that every American baby born in 2019 will use 3.19 million pounds of mined materials over the course of their lifetime: more than 30,000 pounds of salt, 75,000 gallons of petroleum, 53,000 pounds of cement, and the list goes on.

Between minerals, metals, and fuels, we’re dependent on mining.

Our reliance on mined items has even prompted a popular saying in the industry: “if it can’t be grown, it must be mined.” Originating in Missouri, this saying was created by the mining industry to show the large impact that farming and mining have in that state.

Underground and surface mining are the most common types of mining, but they are only two of the four main types.

Underground mining is generally expensive and used to access materials deep beneath the surface of the earth. (e.g., gold, silver, and iron)

More than two-thirds of the world’s minerals are extracted through surface mining, which is most commonly done through quarrying or open-pit mining. (e.g., coal, rocks, and gold)

The kind of mining that the average person is most likely to experience, placer mining is the act of mining a stream bed for mineral deposits. (e.g., gold and gemstones)

Primarily used to gather uranium, in-situ mining involves dissolving the mineral in water while it is still in the earth before pumping it up to the surface to be treated and processed. (e.g., copper and uranium)

Constructing a mine isn’t as simple as grabbing a shovel and digging. There is a great deal of planning and preparation that goes into the process before a single ton of earth can be moved.

The mining process is generally broken down into five phases:

Sometimes divided into two phases—prospecting and exploration—this phase is used to determine the viability of a site. Geologists and experts are brought in to sample, measure, and map out the geology. The potential mine is valued based on the projected size of the mineral deposit. If it’s not worth the effort, the mine is abandoned. If it is, the mine moves into the second phase. 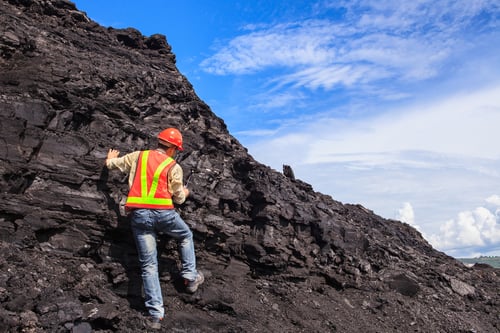 More experts are brought in from a wider range of fields. They conduct studies to discover if the project is safe, socially responsible, environmentally sound, and economically practical. Through the information gathered they are able to create a baseline and project any long-term impacts using site designs and environmental surveys. With the data collected from the experts they are able to determine if there is enough of the mineral resource to move forward.

Before construction can begin, scads of red tape and paperwork have to be completed. After permits, mining rights, approval, more research, access roads, and a power source have all been obtained, construction on the actual mine can begin. The type of mine will dictate what this process looks like. At this point, the creation of access roads for excavating equipment, power sources, miner housing and facilities, processing facilities, and the structure of the mine begin to take shape. 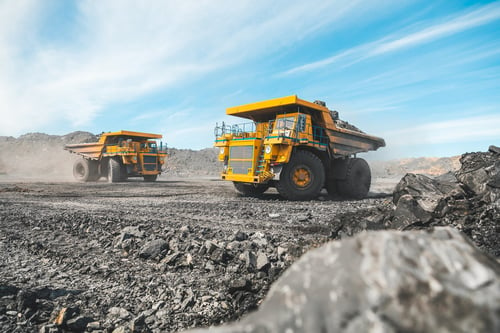 During this phase, miners are actively working to extract the minerals and sending it to a processing plant. Once at the plant, the valuable material is separated from the debris and sent to market. Multiple times throughout the year the Mine Safety and Health Administration (MSHA) inspects the health and safety compliance. Many pieces of heavy equipment keep the production phase running smoothly. Excavators, bulldozers, and heavy-duty trucks move earth and transport the mined materials.

Perhaps the most important part of the process, the closure and reclamation phase deals with the dismantling of an exhausted mine. Any waste or hazardous materials are hauled away, and the surrounding area is stabilized to prevent erosion. The land is rehabilitated with new vegetation and work is done to ensure any nearby water remains clean and uncontaminated. One of the most common ways to reduce the water’s acidity from the mining process is the introduction of lime or another neutralizing material. This process often requires the construction of a water treatment facility and the use of piping and filtration systems to improve the water quality.

A Look at the Numbers: Mining in the U.S.

13 proved a lucky number for America in 2019—there were also 13 states that produced more than $2 billion in non-fuel minerals. Nevada, Arizona, Texas, Minnesota, and California led the pack.

As for coal, the U.S. produces upward of 750 million short tons every year through a combination of surface and underground mines. Wyoming produces the most of any state (by far), at more than 300 million short tons or 40 percent of America’s total production. West Virginia, Pennsylvania, Illinois, and Kentucky fill out the rest of the top five coal mining states.

With so much coal at our fingertips, America is able to export a fair amount. In 2018, the U.S. exported more than 100 million short tons of coal—importing less than six. (Strange as it may seem, it is cheaper for some coastal towns to import coal rather than transport it from America’s coal regions.)

Trade wars, elections, and changes in environmental regulations make it difficult to predict exactly how the numbers will shake out over the coming years, but the future of mining looks strong. Ever-evolving technology (in line link: mining blog 3) and innovative breakthroughs make the industry safer, more cost-effective, and more environmentally friendly, improving life for both miners and consumers. For instance, the mining industry has been using virtual reality to train miners how to use explosives without putting themselves or others at risk.

If you’re seeking specific solutions to a mining challenge, we’d be delighted to offer our trusted solutions and help your company thrive in the months and years to come. Contact us through our website to get started.