Ribbons Across the Land

As the debate over new infrastructure legislation heats up in Washington D.C., we thought it might be a good time to repost an article Ribbons Across the Land originally published in our Dixon Boss magazine in the spring of 2006. We hope you enjoy re-visiting the feature. 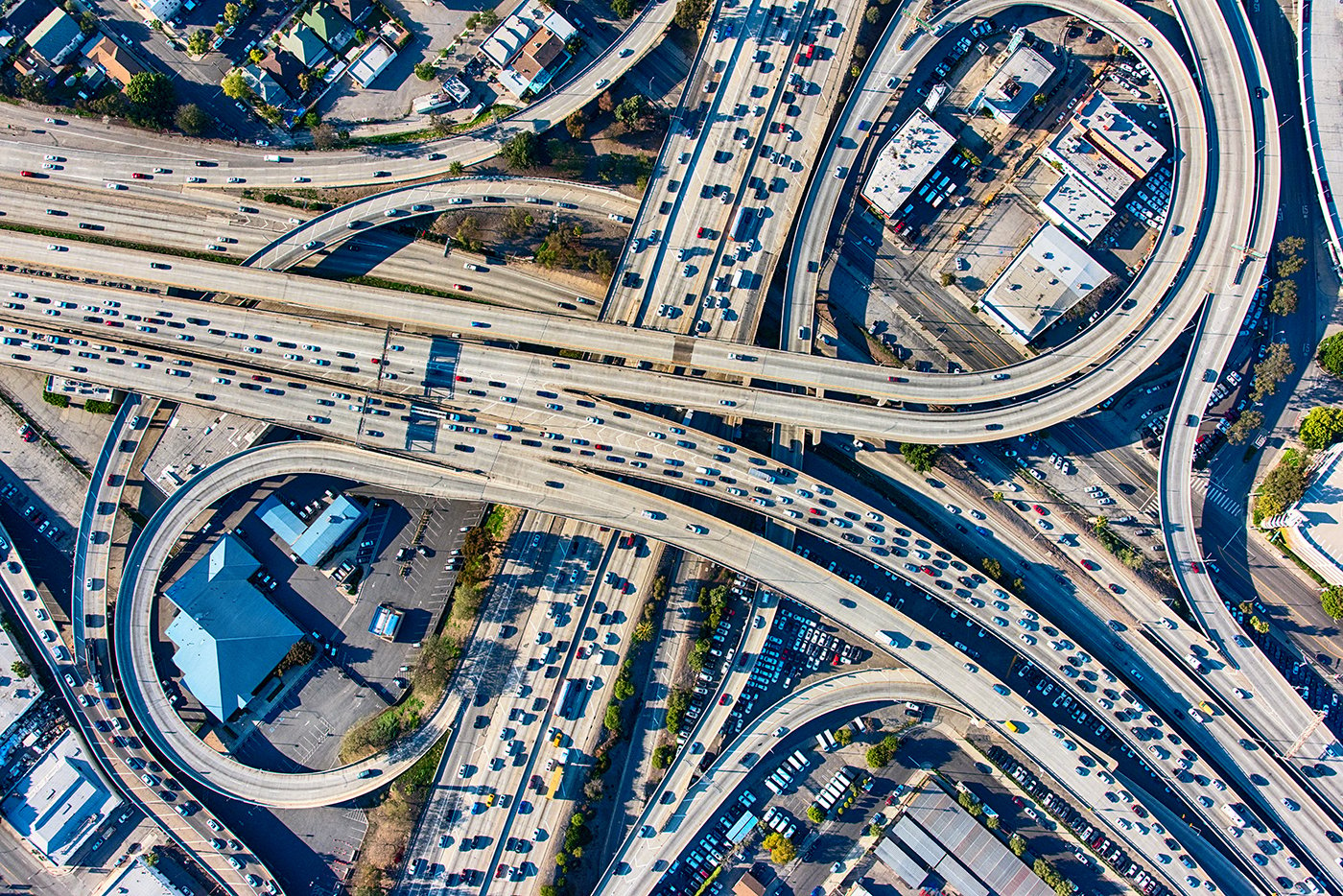 Photo courtesy of iStock/Art Wager
The heavy traffic on the interchange between the Interstate 10 and 110 freeways near downtown Los Angeles, California during rush hour.

Are We There Yet?
These four words, emanating from the back seat of a minivan, are enough to parents scrambling for their iPods.

But today's highway travails are nothing compared to what a young Dwight D. Eisenhower experienced back in the summer of 1919, when he set out from Washington, D.C., on a transcontinental convoy to assess the United States’ fledgling road system. “In those days, we were not sure it could be accomplished at all,” Ike would later recall. “Nothing of the sort had ever been attempted.”

With World War I just ended, military leaders were eager to find out how quickly troops could move across the United States in the event of another war. The answer? At a snail's pace. The convoy of trucks, which crawled across the nation's “Lincoln Highway” at speeds averaging just 5 miles per hour, took more than two months to reach San Francisco from the East Coast, according to Dan McNichol, author of The Roads That Built America. Along the way, McNichol notes, the expedition lost 21 men to injury, damaged or destroyed 88 bridges, and left nine trucks behind on the road—in muddy ditches and at the bottom of embankments.

“It's not possible to exaggerate how bad roads were back then,” says Roger White, former associate curator at the Smithsonian Institution's National Museum of American History, in Washington. “Automobile development was way ahead of the roads of the time.” Once past Illinois, the convoy encountered only dirt paths and trails nearly all the way to California.

For the young Army lieutenant Eisenhower, the arduous 3,200-mile trek left an indelible impression. More than two decades later, when World War II took him to Germany, he looked with marvel at the autobahn. “Hitler's Road” was a model for the modern superhighway, with its high-speed, multi-lane, limited-access, divided roadways. In fact, once the Allies gained control of the autobahn, the defeat of the Germans came within six weeks. “The old convoy had started me thinking about good, two-lane highways, but Germany had made me see the wisdom of broader ribbons across the land,” Eisenhower wrote in his 1967 book At Ease: Stories I Tell to Friends, in which he shared memories of his life up to the end of his military career.

On June 26, 1956, Eisenhower saw his dream for these “broader ribbons” realized when, as president of the United States, he signed into law the largest public works project in the history of the world: the National Interstate and Defense Highways Act. The ambitious program (later renamed to honor the president) aimed to connect the entire country—East and West, North and South—with the federal government footing 90 percent of the construction bill. Originally estimated to cost $37.62 billion, the project would balloon to a whopping $128.9 billion by the time it was completed in 1991, according to the American Road & Transportation Builders Association (ARTBA).

“This nearly 47,000-mile road network is a symbol of the freedom that we enjoy as Americans,” notes former U.S. Secretary of Transportation Norman Y. Mineta. As the 65th anniversary of the interstate system approaches it is worth considering that though the interstates account for just 1 percent of the nation's roadways, these highways carry 23.8 percent of all traffic, including 49 percent of all truck traffic.

The punishing loads have left their mark, on the interstates and the legions of other highways constructed in the United States and throughout the world during the same period, points out William Buechner, Ph.D., former vice president for economics and research at ARTBA. “Most highways built during the 1950s and 1960s were constructed for a 40-year life span,” he says. “But traffic has certainly been heavier than anyone could have anticipated.”

In 1960, for example, the number of registered U.S. vehicles stood at 74 million. By 2021, that number had skyrocketed to 276 million vehicles. It should come as no surprise, then, that many of the nation's roadways today are buckled, cracked, and riddled with potholes.

Think of a highway as a layer cake. Highway engineers begin their cake with a bottom layer of soil (subgrade), which must be compressed and stabilized to hold the layers that follow. The compression process “usually involves blending and grading it to the approximate proper elevation,” explains Steven M. Waalkes, former managing director of technical services for the American Concrete Pavement Association (ACPA). “Then the soils are compacted with rollers to achieve the proper density.” Sometimes the soil is poor (think: clay and silts) and must be improved. In the case of concrete paving, road builders typically add chemical stabilizing agents.

These agents can include cement, cement kiln dust, lime, or fly ash. “These chemicals act as binders and drying agents, which makes the soil stronger and able to support the subsequent layers,” Waalkes says.

The next layer in the cake is the base layer (sub-base), made of rock, crushed stone, asphalt hot mix, or recycled concrete. The busier the road, the thicker the base will be, says Bill Davenport, former vice president of communications and membership for the ACPA.

Once this is set, workers can create the main, top layer—which can range from 8 to 13 inches thick—of asphalt or concrete. While concrete is considered a rigid pavement (offering smoothness, durability, and safety, Davenport notes), asphalt is petroleum-based and more flexible.

In the case of concrete, workers either truck in a concrete mixture from a processing plant or mix it using central mix plants on or near the paving site. The cement is then placed on the roadway. Much the way a baker uses a spatula to smooth and even a cake's icing, construction workers operate a slipform paver, which uses sensors to make sure the concrete it is laying is straight and level. A screw-like apparatus under the paver spreads the concrete, while the sensors guide the track and define the width of the road. The paver is also able to adjust to curves and changes in grade—the angle of the highway.

“That assures that they are laying down a consistent thickness,” explains Davenport. “Behind the paver, people are smoothing the pavement—finishing it with hand tools and helping to cure [dry] the pavement.” To control cracking, the pavement is saw-cut into slabs and often reinforced with smooth steel bars—dowels—across transverse joints. “These bars are used to ensure that neighboring slabs can assist in carrying traffic loads that are applied on an individual slab,” Davenport says.

When traffic engineers opt for asphalt as the top layer of their cake, their operators must fire up the ovens. That's because asphalt is made by mixing asphalt (black, petroleum liquid) with aggregate (crushed stone, gravel, and sand) and then heating it to temperatures of 275 to 300 degrees Fahrenheit. In the most common process for laying an asphalt road, the mixture is heated at the plant and then trucked to the roadbed, where it's dumped into the hopper of a paver and placed onto the roadway. Workers use augers to spread the asphalt evenly. Then a steel bar, called a screed, passes over the area, making sure the material is an even height and thickness across the road. In the final step, workers use rollers to compress the asphalt surface. 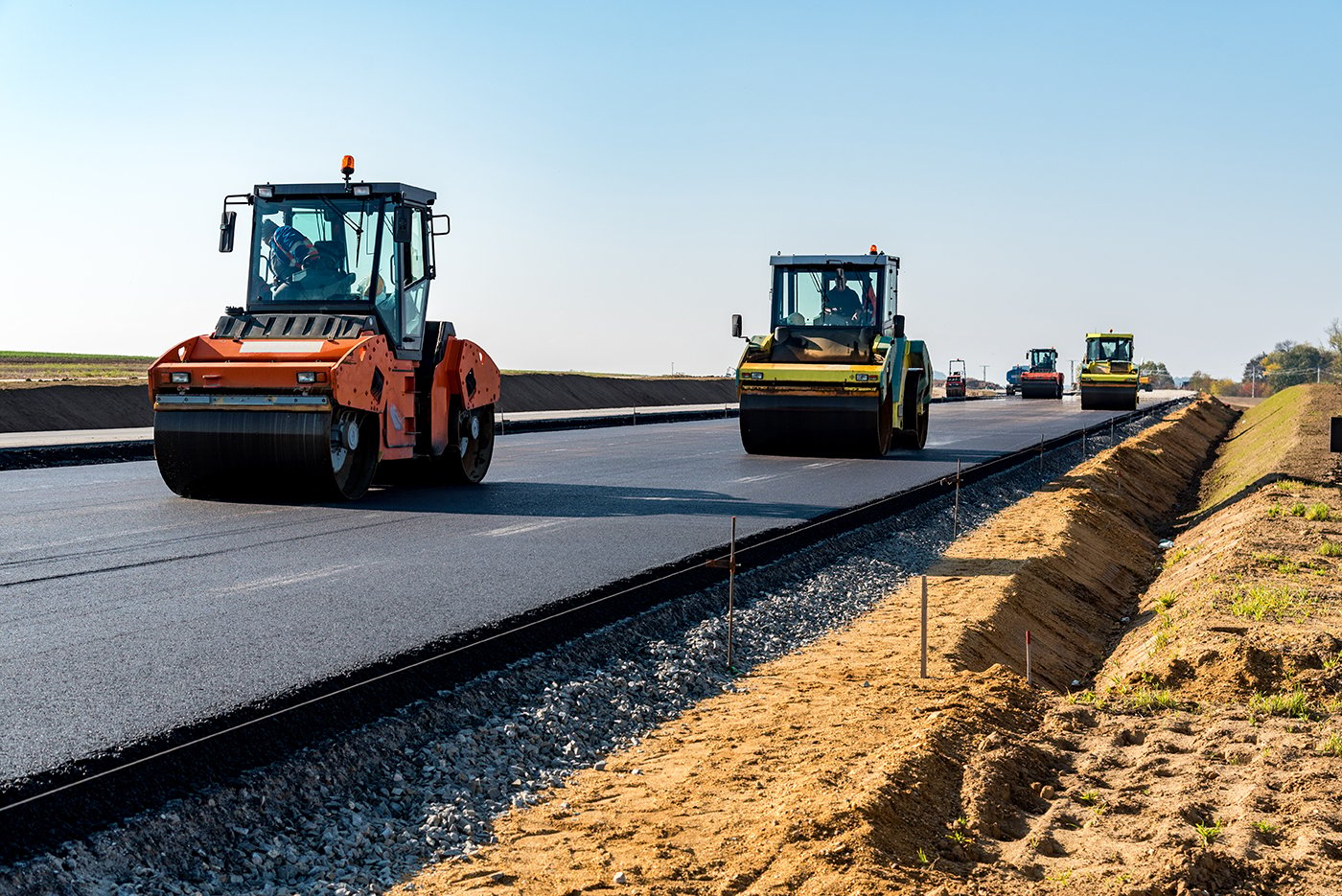 Along the nation's aging highway infrastructure, it's this top layer—whether asphalt or concrete—that first shows signs of wear and can be a tip-off to damage below.

That's why the big story in highway construction these days lies in repair, maintenance, and preservation, according to the ARTBA's Buechner. He estimates that 97 percent of all federal money is dedicated to preservation efforts. “There are no more than 300 to 400 miles of road each year built new with federal funds,” Buechner says.

On August 10, 2005, President Bush signed into law a sweeping transportation funding bill that authorized some $286.4 billion to be spent from 2004 through 2009, on highways, highway safety, and transit programs. Known as H.R.3 - SAFETEA-LU (for Safe, Accountable, Flexible, Efficient Transportation Equity Act: A Legacy for Users), the law guaranteed just over $36 billion for highways for 2006 alone.

As policymakers allocated these funds to road repairs, they looked to highway engineers to use the latest technology—including recycled materials—to cut costs, reduce disruption to traffic, and minimize environmental impact.

According to David Newcomb, former vice president of research and technology for the National Asphalt Pavement Association, most “mill and fill” highway renovations currently enable contractors to reuse about 20 percent of the original asphalt. In addition, says Newcomb, “People are constantly looking for ways of introducing recycled materials into asphalt.”

He notes that discarded tires have become a popular source of “crumb rubber” that is ground into granular bits, blended with liquid asphalt, heated, and stirred for several hours until “digested,” then combined with aggregate. The asphalt recycling strategy, first used in Arizona during the 1970s, is popular in warm-weather states like Florida, Texas, and California. Other contractors are using recycled roofing shingles with great success, Newcomb says.

Davenport, of the American Concrete Pavement Association, points out that concrete is the most recycled building material in the world. “Typically, a concrete pavement that has served past its design life may be crushed and the steel reinforcements separated and recycled in their own right,” he says. “The crushed concrete is then used for base materials, but also may be used in other applications. One example is known as “riprap,” which are large pieces of concrete typically used on an embankment as erosion control and protection against water damage or flooding.”

He says the concrete industry is also working hard to come up with ways to lessen disruption to traffic. One current promising strategy is known as “fast track paving technology.”

“Many people assume concrete must cure for 14 or 21 days, but fast-track methods allow same-day reopening to traffic,” Davenport says, adding, “A few years ago, a section of paving was closed after the morning rush hour in mid-town Manhattan, New York, repaired, and reopened for the [afternoon] rush hour.”

Notes Newcomb: “Technological innovation is the key to producing the longer-lasting, more economical and environmentally friendly roadways of the future.”

If you enjoyed the article please share it with your colleagues and check out this page for more great reading!