What Products Are Made From a Barrel of Crude Oil?

While most consumers are familiar with the gasoline and diesel that power their vehicles, do they know where the fuel originates? Oddly enough the same gasoline and diesel that is in your vehicle comes from the same barrel of crude oil that produces other products like asphalt, jet fuel, motor oil, and tires. It is truly amazing how many different products are produced from the world’s most valuable fossil fuel!

How Much Crude Oil Is In a Barrel, and What Products are Manufactured From It?

The standard barrel of crude oil contains 42 gallons of crude, which is converted into approximately 45 gallons of petroleum products during the refinery process. This volume increase is referred to as process gain. Below is a chart that outlines how the crude is distributed into different product sectors. 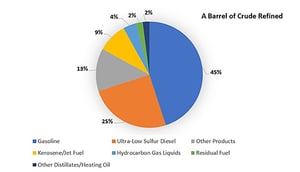 Nearly half of the standard barrel of crude oil is refined into gasoline. Most gasoline that U.S. petroleum refineries produce is an unfinished product. Why? Because unfinished gasoline needs to be transferred to a blending terminal to be mixed with gasoline blendstocks that produce different formulations of fuel grades for consumer use.

These grades include regular grade (87), medium grade (89), and premium grade (91). While these are the industry-known terms for specified fuel grades, some companies have different names for their grades of fuel that may also include unleaded, super, and super-premium but they all contain the same octane rating regardless of the variation of names that have been given. The higher the octane in the gasoline, the higher the price will be per gallon at the pump.

Prior to 1996, lead was added to gasoline as a lubricant to prevent engine valve wear. By 1996, leaded gasoline had been entirely phased out of the U.S. fuel industry because it was fouling catalytic converters, which are used in vehicles to reduce engine emissions. 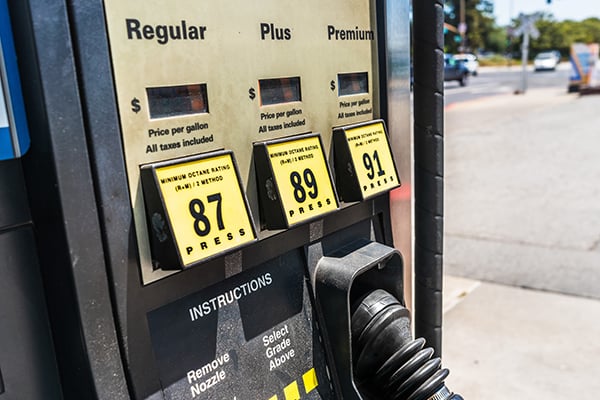 Commonly known as "diesel fuel", ULSD takes up about 25% of each standard barrel of crude oil and is refined from both crude and other renewable energy from plants and animals called biomass materials. When it comes to refined diesel fuels, there are three classifications that correlate to the maximum sulfur allowed in the fuel, and which vehicles can use them. Prior to 2006 most diesel fuels sold in the U.S. contained high levels of sulfur which causes hazardous air pollution. The United States Environmental Protection Agency announced regulations in 2006 to lower the sulfur level of diesel fuel sold in the United States.

Ultra-Low Sulfur Diesel: 15 parts per million sulfur maximum.
Required for use in all model years 2007 and later for highway diesel vehicles. and engines.

The term "diesel" was actually someone's last name. That's right, French-born Rudolf Diesel was the inventor of the diesel engine in 1892. 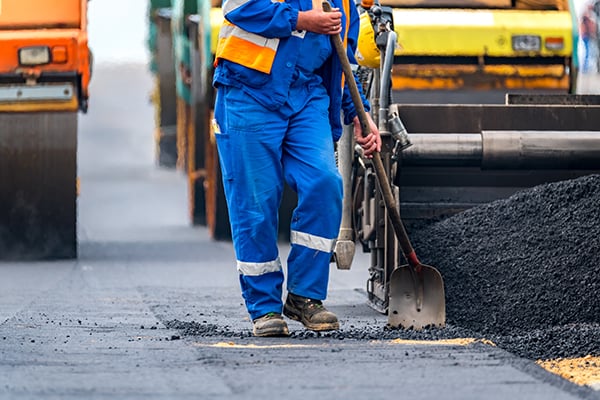 Other products take up about 13% of each standard barrel of crude oil. When refined, crude oil can be found in many products that you may not know about. While it would be far too much to list out all the bi-products of petroleum, some are listed below! 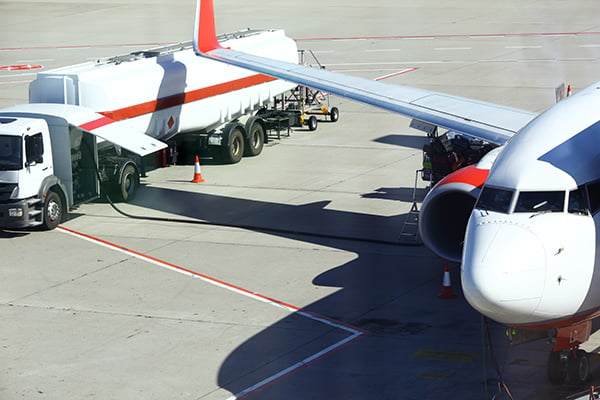 Kerosene and jet fuel take up about 9% of each standard barrel of crude oil. Kerosene is a light petroleum distillate refined from crude oil that is typically used to fuel boilers, lanterns, cooking ranges, and water heaters. Kerosene comes in a variety of grades, with different specifications depending on how it will be used. 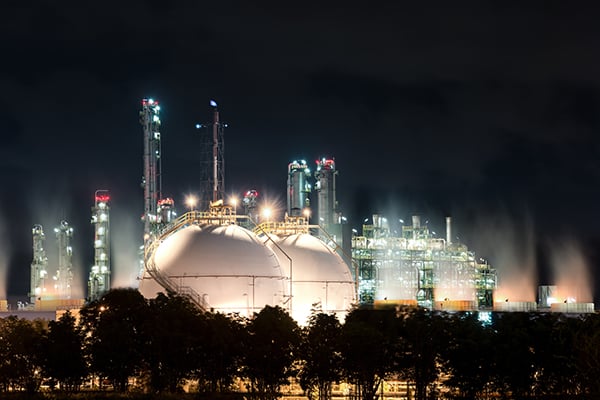 Hydrocarbon gas liquids take up about 4% of each standard barrel of crude oil. HGLs are chemically grouped into alkanes or alkenes. Ethane, propane, butane, and natural gas are examples of alkanes. Alkenes include ethylene, propylene, and butylene.

In short, HGLs are utilized as feedstock in the production of different chemicals, plastics, paints, detergents, and synthetic rubbers. HGLs are also utilized as heating, cooking, and transportation fuels, as gasoline additives, and as blending agents for crude oil products.

Residual Fuels and Other Distillates/Heating Oil 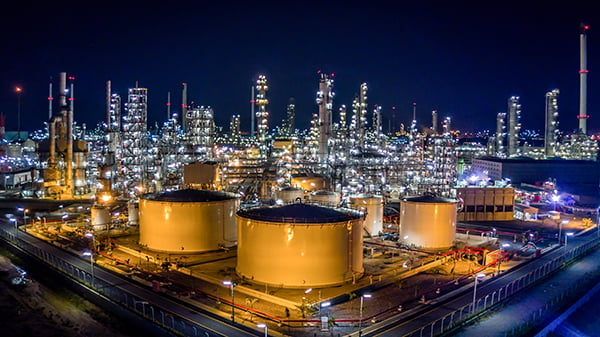 Residual Fuels and other distillates/heating oil take up about 4% (2% each) of the standard barrel of crude oil. These fuels remain after the distillate fuel oils and lighter HGLs have been distilled during refinery operations and are classified into two major categories: No. 5 and No. 6. No. 5 is utilized in military steam-powered vessels and inshore power plants. No. 6 is utilized in the generation of electricity, space heating, vessel bunkering, and a variety of industrial applications.

42 Gallons Can Go a Long Way

In summary, one barrel of crude oil goes a very long way. From gasoline to lipstick, crude oil can be found in thousands of products across the globe. As the decades tick by, this irreplaceable commodity continues to be diversified into more and more products every year.

Dixon® manufactures and supplies a wide variety of products used in the oil, energy, and gas industry. Check out our Energy / Oil & Gas market page for more information or contact a Dixon representative at 877.963.4966 to see how we can help. If you enjoyed this blog post, please share it with your friends and colleagues!