Why Standards for LNG Bunkering Hose Transfer Assemblies Are Necessary

It might be at the time new technologies emerge in areas where there are incomplete knowledge and understanding. It could be when persistent problems reveal deficiencies in current system designs and field operating practices. Or, it might arise when a lack of comprehensive and universal standards is causing work inefficiencies – so much so that companies are needing to “reinvent the wheel” with each new customer application.

In the case of liquefied natural gas (LNG) bunkering hose transfer assemblies, a combination of all three factors appeared to be at work. To be sure, LNG fuels are making great strides as an environmentally cleaner way to propel ships around the world when compared to traditional options such as diesel fuel.  But LNG as a marine fuel remains in the relatively early stages of market adoption, so better standards are needed to help facilitate safe and efficient operations.

The necessity was even more pressing considering the special challenges associated with handling LNG safely – the most significant being the extremely low temperatures (-260°F) and high volatility of LNG. 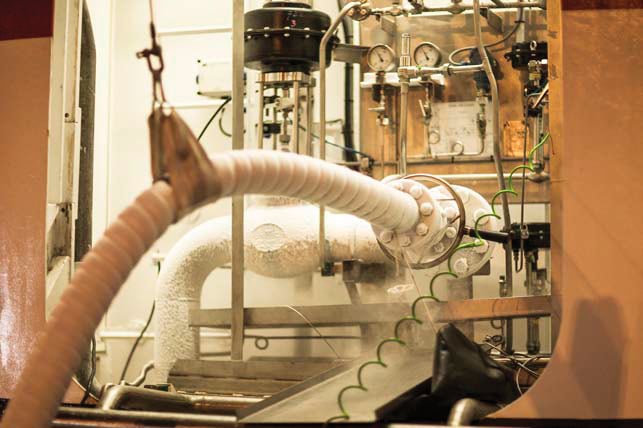 LNG hose in operation on a ship.

Where Are the Best Practices?

Due to insufficient standards, there has been a lack of consistency in the construction of LNG bunkering hose systems.  There were existing standards on the nautical side (IGF and IGC codes for natural gas and LNG safety), the land transport side (U.S. DOT codes) and the Pipeline & Hazardous Materials Safety Administration (PHMSA) and National Fire Protection Association (NFPA) codes for land-based facilities. None of these were comprised of consistent, agreed-upon standards for the equipment to deliver LNG fuel supplies to and from ships. As Thane Gilman, a senior mechanical engineer at the U.S. Coast Guard, notes, “The IGF Code was filling a void in defining general requirements for gas-fueled ships, but there was still a significant amount of work to be done in defining the requirements for specific equipment and systems”.

The lack of standards, particularly in systems such as LNG bunkering hose transfer assemblies that experience repeated connections and disconnections in different locations, was resulting in project inefficiencies and delays.  “Ideally, the systems for which designs are standardized should be ready for connection in any location compliant with the same standard, without the need for adapters or other modifications,” Gilman emphasizes.

Also important for any pressurized liquid system involving LNG is to ensure that the product is transferred without incurring damage to the piping and possible leakage.  “Not only is LNG highly volatile and ignitable, but the extreme cryogenic temperatures of LNG also require special materials for handling – such as in the case of ship hull steel which can become immediately brittle, crack and fail when exposed to LNG,” Gilman notes. 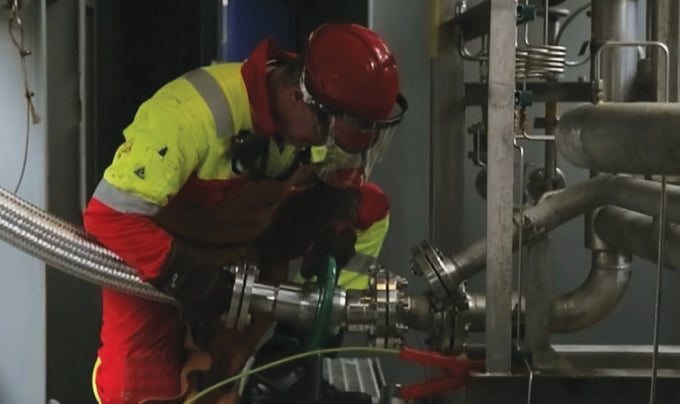 Ship personnel makes a connection of the bunker supply hose to the ship’s bunker manifold.

Rick Foster, a veteran product specialist with metal hose manufacturer Hose Master LLC, explained how this has created an unsettled environment for equipment suppliers.  “At our firm, we’ve had to research the role that hoses, fittings, gaskets, alarms, and safety gear play in the loading process, and the environment in which the function is occurring.  Before recommending a metal hose specification to a customer, we need to know how a hose assembly will work – and how it could possibly fail in the application. Also, we need to take into consideration how the hose assembly will be handled during fit-up and dismantling,” Foster says.

To maximize efficiencies and reduce project lead times, industry players must be able to consult accepted piping and hose assembly standards for guidance.  The leadership of unbiased organizations like the American Society of Mechanical Engineers (ASME) and the American Society for Testing and Measurement International (ASTM) are invaluable in guiding varied interests toward developing new standards that everyone can accept as “best practices” for the industry.

The ASTM is no stranger to this sort of challenge.  Indeed, over its more than 100 years of existence, it has successfully developed more than 12,000 globally used standards.  In short, the ASTM is a logical choice to lead the creation of an operational safety standard. Plus, it has an established track record of developing highly regarded standards tied specifically to the oil and gas industry.

Dixon has been involved in setting ASTM standards in a variety of ways over the years. Most recently Sean Andersen, product manager, and LNG product specialist at Dixon co-sponsored and authored the first LNG bunkering standard,  ASTM F3312/F3312M - 18: Standard Practice for Liquefied Natural Gas (LNG) Bunkering Hose Transfer Assembly.  As a current and active member of ASTM’s F25 Main Committee, Sean reviews between 10-20 active ASTM documents and comments and votes on their approval.  He also engages outside contacts and internal divisions, such as our Dixon Fire division, when reviewing documents for comments before voting. In addition, Sean is also invited to comment on ISO documents for the International Marine Organization to help formulate the U.S. delegation's vote on specifications and regulations at international meetings.

This blog post was excerpted from our whitepaper, Building a New International Standard for
LNG Bunkering Hose Transfer Assemblies. Read all of our whitepapers here.